New high tops and throwback jerseys for everyone!

Share All sharing options for: New high tops and throwback jerseys for everyone! 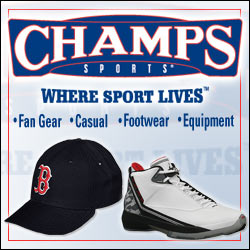 Although it has been widely reported for some time now, the Big East officially announced a four-year agreement with the Champs Sports Bowl to send its best non-BCS representative to Orlando beginning in 2010.

The game will be held somewhere between Dec. 27-29 on ESPN and give the conference a payout of up to $2.4 million. The new deal also ends the conference's "hybrid" partnership with the Gator Bowl.

Of course, the Big East cannot make a deal without being screwed over in some way by Notre Dame, the Roman Catholic VD of the conference. The Champs people can take Notre Dame once every four years -- a slight improvement from the Gator, which was able to take the Irish twice every four years -- with the stipulations that it must be at least 7-5 and it has to be within two wins of the second-best Big East team.

This deal has me feeling pretty meh, so I've listed my thoughts out in pro/con fashion:

Pro: It will improve the Big East's overall bowl tie-ins

Especially if a rumored deal with the Sun Bowl is worked out to accept our No. 3 team. With the Sun, the Big East will still have a pretty soft lineup compared to the other BCS conferences, but a better one than in years past:

Not a bad list. Not really great. But not bad, either.

Con: But it's still nowhere near the other conferences' lineups

I know, I know. There's no way the Big East will ever share the same privileges, at least in this decade. But being the only BCS conference to always have to settle eats away at you, one International Bowl bid at a time.

Pro: The parameters of the deal are much better than what the Gator Bowl was offering

Perhaps the biggest pro of them all. For once, the Big East took a stand. Tired of having to accept deals that take advantage of its stature among the big six, it finally said thanks but no thanks.

Just standing up for itself is big. And even though Champs Sports is a little less prestigious than the Gator Bowl, the deal it got to play in a Big East-friendly market is worth it.

I officially loathe this program.

First, it tried to bully UConn around like it was Syracuse in negotiations for the proposed series by requiring the Huskies' home games to be played anywhere except East Hartford. And now this. Well, adding the Irish to bowl agreements has been happening forever. But still! I'm on a rant and full of exclamation!

I'm sure it works out financially to include Notre Dame in the bowl pacakges, but still. Having to succeed one bid every four years -- a clause that will undoubtebly be used, most likely when the Irish barely eek out a 7-5 season -- just sucks.

Perhaps the conference should take another stand and force Notre Dame to join in football or cut off all ties in all other sports. (Which will never happen.)

But the sad part is, the conference still needs them. Even Marianatto knows that.

Pro: Instead of a trophy, the winning team gets five throwback jerseys to share

And I've officially beaten this joke to death.

Pro: Is there a big difference between the Gator and Champs Sports?

There's a fairly obvious tier system that the bowls fall into: the crappy ones at the beginning, the halfway decent ones after Christmas and the BCS.

While the Champs Sports doesn't play on New Year's or have as much history as the Gator, is there really much of a difference? I say no. Neither are BCS games, and if we want to be more specific, both are a little less enticing than, let's call them the upper-middle class of bowls: Cotton, Capital One, Outback, etc. And I would probably avoid both the Gator and Champs Sports unless they had a particularly good matchup.

This isn't too important, but it's just another one of those things that makes you feel Napoleon's pain. Not the stomach cancer; the short thing.

There's in ego involved in being a BCS conference. And, as I said earlier, it hurts to be constantly reminded of your inferiority. Especially for a conference that believes everything associated with it should be written in caps lock. Excuse me, CAPS LOCK!!!!

Not playing on New Year's won't do much, except maybe lower its visibility a bit. But it's also another example of how the Big East is the Danny Devito of football conferences while the others are five Arnolds in cabana clothes and white blazers.

But even Marianatto knows that the conference still needs them.