The future is now: Difton, Todman new No. 1s

Share All sharing options for: The future is now: Difton, Todman new No. 1s 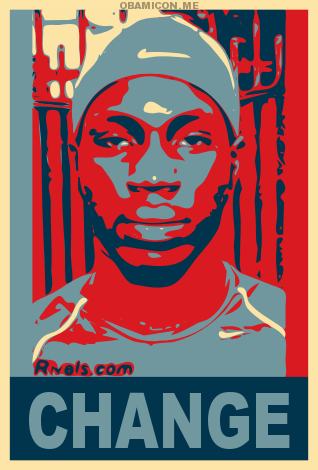 Behold: The future is here. ... Which is a long-winded way of saying it's the present. Still. Yays~!

After finishing either 97th or worse in passing offense for the fourth straight year and scoring just five touchdowns through the air (two to actual receivers), Randy finally, and mercifully, decided to shake things up.

In a move that is as much an indictment of the returning receiving core as it is an admission of how talented the young receiver is, freshman Dwayne Difton, he of SEC speed and hands of Midas, was listed as the No. 1 receiver when the latest depth charts were released to the team Sunday, according to UConnReport.com.

"'He's as good a route runner as I've seen come in as a freshman,' said head coach Randy Edsall, who will publicly release the depth chart after fall camp has concluded. 'He's got good hands, he's got courage, he's not afraid to go across the middle and he's got a good background. He's been very well-coached.'"

Are those harps I hear?

Oh, wait. They get louder.

If it wasn't enough to have a legitimate No. 1 receiver, the team also installed Jordan Todman as the No. 1 tailback, according to The Courant's Desmond Conner, sending Andre Dixon back to the No. 2 role and, most likely, back to his flask. Todman will also return kickoffs, along with fellow RB Robbie Frey.

"Oh, yes, Jordan Todman is the No.1 and running backs coach Terry Richardson confirmed it and Andre Dixon is No.2 right now."

"'We're always evaluating because we want to keep the pressure on these guys to stay on top of their game and perform,' [running backs coach Terry] Richardson said. 'Right now, Todman is our No.1 guy. Dre is working. He's having a good camp so far. All these guys and I tell them, you all have to be ready to play because you never know what's going to happen. I coach them all like they're going to be starters. Obviously when we do the evaluation we list them one, two, three. But that could change from practice to practice it could change from week to week depending on who's hot and who's not.'"

Not all the vets were chased off, however. It seems Dan Ryan will be your left tackle, winning the competition over the highly touted Jimmy Bennett, who was "still too wet behind the ears and is not ready at this time," according to Edsall (via Conner). Score one for the vets, I suppose. But Bennett will be good when the time comes (he's just a redshirt freshman).

Man. Where to begin?

One of the main reasons Diftton, a four-star prospect from one of the best high school teams in the nation, signed with UConn was to be the go-to, No. 1 guy the team has never had. And it took him all of a week to assert himself as such. The fact that he was able to surpass every single receiver on the team, some who have been here three, four, five years, is amazing (and also a bit crushing).

Edsall always takes shots at the recruiting services, and to his credit, he's been able to build a moderately successful program by taking players who, combined, have as many stars as USC's kick squad. But in this case, the Rivals guys may be on to something.

But in addition to a high rating (he was the No. 39 receiver in the country, per Rivals) he also played at St. Thomas Aquinas, where he played against top competition and, as Edsall points out, was coached by some of the best the high-school level has to offer. And Conner also points out that he's been working out with future Hall-of-Famer Chris Carter. So he's probably more prepared than some of the other receivers that have been brought in, especially since a good chunk weren't necessarily receivers before coming to Storrs.

The only thing that really concerns me -- and I've pointed this out before -- is that Difton has never been the No. 1. At Aquinas. That role went to Carter's son, Duron, who is now at Ohio State. But by blowing off other offers in order to become The Guy at UConn, he's shown he has the attitude and cockiness you kind of want in a No. 1. And, apparently, the coaching staff feels he has the talent to be one, too.

As far as Todman's promotion, it seemed like it was pretty imminent. Despite Conner's puff piece on Dixon the other day, I pointed out that Dixon quote from Runway Ramblings that made it sound like the troubled back hadn't changed at all. And Richardson is quoted by UConnReport as saying that he hasn't seen much change in him this season.

If that’s the case, the coaching staff made another good decision. Todman show last season that he can be not only a productive back, but a player that can score every time he touches the ball. I have no idea what happened to Dixon since his All-Big East season. But he’s obviously not the same player, at least mentally.

The good news for Dixon is this move doesn’t completely relegate him to the dark abyss he fled to last season. Richardson’s quote makes it seem like he’ll get his share of carries. And with Todman a generous 189 pounds and in his first season as, at least, RB 1A, he may see his share of nicks and bruises.

(Update: This post had about five more paragraphs, but I'm not sure what happened; I'll add to it when I can. Sorry!)

But at this point, it looks like Dixon may never be the same player he once was. That 800-yard season feels like it was centuries ago.

Instead, the coaching staff is moving on. And kudos to them for doing so. Despite running a vanilla offense for pretty much his entire career up to this point and projecting a straight-and-rigid appearance – boxy hair cut, stereotypical coach speak and demeanor – Edsall hasn’t been afraid to take some risks.

He brought in Joe Moorhead to install a more exciting and progressive offense. (After four years of offensive god-awfulness, but still.) He wasn’t afraid of replacing Rob Lunn and Alex Polito with Kendall Reyes and Twyon Martin at DT midway through the season. And now he’s passing over some safer, more experienced options and putting his offense on the shoulders of two incredibly talented but incredibly green skill players.

With Donald Brown gone, the team can’t afford another year of Larry, Kashif and Moe at wide receiver. And since it can’t get any worse than last season, why not get your best talent on the field to build for the future? The team is already predicted to finish at the bottom of the conference, so you won’t be letting anyone down.

New offense, new QB, new No. 1 receiver AND new running back? I may just shed a tear.

UConn football, welcome to the 21 Century.