Goofy mohawks: The only way to feign solidarity and look good doing it

Share All sharing options for: Goofy mohawks: The only way to feign solidarity and look good doing it 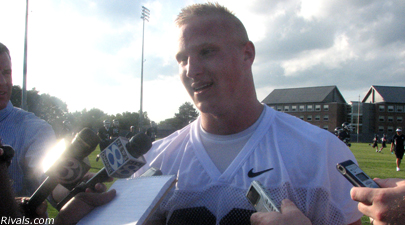 Look! We're such close group! I mean, have you SEEN our hair? Who else would do this, besides about 100 other teams?

The Huskies opened summer camp on Monday and the big news to emerge was that it was hot.

It was soooooo hot, that robins were laying eggs sunny-side up!

Seriously, it was pretty hot. But despite the pretty rough conditions for opening day, Edsall made a big "W" with his fingers and told them to take a lap.

"I'm glad it was hot out here, and I wish it was even hotter," Edsall said. "I hope we'd get another week or so of this 90 degrees, because we need it. But it's just good to get them back in here and to practice at our tempo."

He's right, though. Who doesn't need a good tan for the summer?

Anyway, aside from the risk of heat stroke, other news to come from the first practice was pretty underwhelming. (Which is probably good, considering most exciting camp news involves torn ligaments.) Dwayne Drifton (*swoon*) and Mike Lang looked good, Zach Frazer showed off the product of his Nutrisystem diet and Andre Dixon made some nice "catching passes."

One interesting note that popped up, though, was that some of the players began sporting mohawks. Nice, incredibly trite, team-bonding mohawks.

How long until the season starts?

The Courant had a glowing puff piece about Dixon and his battle with Jordan Todman for the No. 1 tailback spot, which can be summarized like this: Dixon prayed at practice, Edsall may have a man-crush on him and Dixon is hungry again (most likely for a samich). Oh, and the competition will be tough because of their different " speeds and shiftiness." I wish I could make a joke about this, but I'm still trying to comprehend how two players can be equally shifty (in a good way) but different in the way they are shifty. You see? Even that doesn't make sense.

Anyway, the best thing about the article is that it's unintentionally undermined by this gem of a quote on Runway Ramblings:

"Asked if he mulled not returning this year, he said 'If Don (Brown)came back, I probably would have left. He had such a great year, I don't think he was about to slow down, so who knows.'"

Beautiful. That's the type of desire I like to see.