Share All sharing options for: Madea goes to football practice or: WOOOFOOTBALL'SHEREWOO0O!!!11!1! 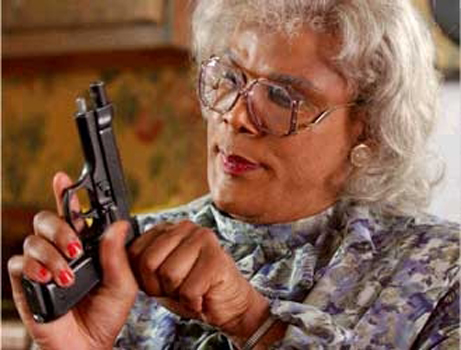 Tyler Perry takes on his most challenging role yet: An aggressive, grey-haired, bespectacled black matriarch ... on A FOOTBALL TEAM!!! Let the good times roll!

While some teams' seasons have already begun, today is the official start date for the 2009 college football season in the state of Connecticut.

No, Coach Cal and the gang didn't play a pickup game with Jonathan Mandeldove playing the part of field-goal post, nor did Michael Vick bring his Revival © tour bus through Hartford. Yet.

Today, at around 4 p.m., the UConn Huskies football team will skip their afternoon snack and practice (officially) for the first time, ending the most mind-numbing four months of the sports year, and beginning a slightly less-mind-numbing-but-a-little-bit-more-exciting-because-hey-it's-football-and-who-doesn't-like-football? ... uh, month.

The best part of summer practices, they tell me, is that everyone starts 0-0 and with the same chance at a national title (except for the MWC). You forget that a cornerback caught 1/5 of your passing touchdowns, that you consider a 12-9 overtime win over Temple a "victory" and that Tyler Lorenzen ever existed. You'll even forget that your team hasn't won more than four games in each of the past four seasons. (Hi-oh!)

Luckily, over the next 26 days, TheUConnBlog is here to bring you back to soul-crushing reality.

Over that time, we'll be rolling out (most likely on a Stanley Robinson (i.e. consistently inconsistent) basis) nine different position primers, capsules on each of UConn's 12 games, a general season overview and the return of the critically acclaimed "State of the Big East." All, of course, with the caveat that we retain the right to be lazy and not finish any. So be on the lookout for those over the next few days/weeks. We hope.

But until then, here's a little refresher of last season and a look at some of the top position battles heading into camp:

QB: With noodle-armed Tyler Lorenzen finally out of the picture, the team has a shot to have an actual quarterback for the first time since the Reagan administration. (That's when Dan O. last played, right?)

Zach Frazer goes in as the No. 1, the big favorite and the one that can make the ladies (and Meacham) swoon. But Cody Endres also has a shot after performing okay in two starts. Joe Moorhead brings his "multiple" offseason in to replace the departed Rob Ambrose's inside-draw attack, so whoever wins will have to actually know how to throw the ball.

RB: Heading into last summer, UConn was expected to feature a potent 1A, 1B combination in the backfield. But after injuries and a a few benders put Andre Dixon on the shelf, Donald Brown quickly took the reins and carried the offense. I'm not making a joke here. He literally carried the entire offense.

We head into this summer again expecting a two-back system. But while most assume there will be some type of timeshare, or that Dixon will emerge as the feature back, you may be in for a letdown. Jordan Todman may be young and about 100 pounds too light for the position, but he has the speed and skill to be a differencemaker.

WR: Unfortunately, most of the same culprits from the Touchdown Famine of '08 are back: The brothers Moore will likely be in the mix and so will Brad Kanuch, who has essentially been a starter since his freshman year. Which is a terrible, terrible thing.

With any hope, one of the 60 receivers redshirted last season will emerge, or talented freshmen Mike Lang and Dwayne Difton will use their SEC speed to take the starters' spots. But at this point, I don't even think Edsall has a clue.

The good news for Moorhead is no matter what happens, his passing game will look good by comparison. The bad news is that he may have the worst collection of wideouts in the NCAA.

DE: Lindsey Witten, who was just named to the Hendricks preseason watch list, will occupy one side and may finally have the breakout season that was predicted for him back in 1996.

The other side, though, is a big question. Especially now that Marcus Campbell won't be around.

But the Huskies have built a lot of depth on their lines, and one of the trio of Trevardo Williams, A.J. Portee and Jesse Joseph should be fine.

S: Last offseason, the coaching staff moved Dahna Deleston from safety to linebacker and then back to safety before the first game. So let's try this again.

Robert Vaughn will be back at free safety, but the strong side remains in doubt. Right now, redshirt sophomore Jonathan Jean-Louis has the inside track, but Jerome Junior could also be a factor. The spot is likely Jean-Louis' to lose, especially if he continues to make crepes at team brunches, but it is far from set in stone.