I'm back or: Things other people are saying about UConn

Share All sharing options for: I'm back or: Things other people are saying about UConn 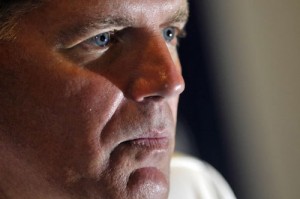 Well, it only took me five months to recover from that ill-fated trip to Detroit, but I have returned and plan to once again contribute to this lovely corner of the Internet. Justin *ahem* Jesus has done a fantastic job keeping the site alive, in fact, he has done so well that I barely recognize it. What is this football everyone is talking about? and why does UConn no longer have a cool single-digit number next to their name indicating superiority? This sport of football seems foreign to me and I'm not sure that I like it, however, since plenty of other people seem to, I'll get back into blogging shape by doing what bloggers to best, aggregate the content of others.

First off, you might want to head over to The Gray Lady where The Quad blog has tackled the massive task of ranking all 120 F.B.S. (nee 1A) teams. Checking in at nearly 3,000 words (!), it is almost certainly the longest thing every written about something that only charted at #68. It is pretty old and spends a lot of time rehashing recent history, but if you need a quick graduate-level course in UConn football (perhaps because you are the proprietor of a blog about the school) it will fill the need. Oh, and they project UConn out to have a thoroughly mediocre 6-6 (3-4) season.

Next you can swing over to Eye of a Panther, where five Big East blogs (plus three Syracuse blogs) have combined to create a pre-season blogger poll, and, as Mr. Shuttlesworth pointed out in TheTwitterAccount, if you don't like the picks, blame Meacham. For the record, UConn is projected to finish sixth, (four fifth place votes, four sixth place votes). Also of note, someone (not us) voted for Andre Dixon (!!) as a possible all-conference running back. Even a know-nothing homer like me thinks that is absurd.

On the next stop in our internet journey, make sure to hit up Troy Nunes, where the latest meeting on the Octonion has convened (for the uninitiated, the Octonion is a semi-regular and always hilarious meeting of the 8 Big East Football mascots). It is good for a few laughs, plus, there is a solid little discussion about the Huskies, including a desperate plea for UConn to lose early and not be a threat to make the BCS, followed by Jonathon's impassioned plea that UConn really is (maybe) building something good.

Finally, there is this: 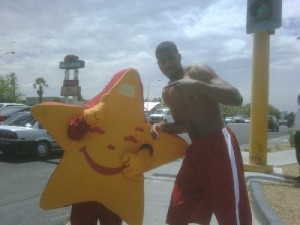 That's right, it is a picture of Rudy Gay and the Hardees mascot. As Rudy so elegantly put it on his Twitter, "Had to do it yall."

It's good to be back, even if basketball season still is three months away.