Share All sharing options for: Michigan men will fear the Fighting Fran Dreschers 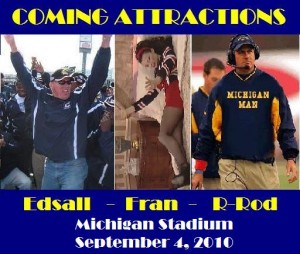 That's the most leg I think we're allowed to show on a family-friendly blog.

Usually, nothing gets in the way of my summer vacation. But I make an exception for what could be the blockbuster announcement of the summer: Manny Ramirez and David Ortiz took steroids! UConn and Michigan have announced a home-and-home series in football.

I was writing a speculative post on this subject (and creating that awful MS Paint concotion above) as news broke, but Zac Boyer at UConn's Rivals site appears to have gotten the scoop Thursday afternoon.

The Huskies will travel to Ann Arbor in September 2010 to reopen Michigan Stadium, which is currently in the middle of renovations, and the Wolverines will make the trip to Rentschler Field(!) in September 2013, according to Rivals.

Now, obviously, for a football program desperate for national legitimacy and attention (and a program willing to sell its soul for same), this is huge.

Speaking of Notre Dame: one of the reasons UConn needed that series - and this Michigan series - is because mystique means everything in college football. Teams get ranked in the top 10 because of what happened in years past. Penn State lost a national title in 1968 because Texas was a bigger brand name and had the presidential seal of approval.

For a Big East team who began I-A play during the administration of George W. Bush, it's all about getting name recognition. Playing (and eventually beating) teams like Michigan and Notre Dame is necessary to raise your profile.

So this is thrilling from a UConn perspective.

Anyway, the UConn-Michigan game would also be pretty practical for the Huskies. The 2010 non-conference schedule thus far includes Northeastern (which will have to be moved/dropped to fit into Michigan's open date), Buffalo, Temple and Vanderbilt. The Wolverines, 3-9 fiasco last year aside, are of course several levels above those programs.

Getting a home-and-home with Michigan (in addition to the similar arrangement UConn made with Tennessee some time ago) is a huge leap forward in credibility. It certainly beats the hell out of traveling to Ohio U. and Buffalo.

-Michigan's not going to come and swoop down on all of the prized Connecticut recruits because, well, there are none.
-Over 110,000 people may register the idea that they do play a sport besides basketball up in Storrs.
-No one will expect UConn to actually win. Pressure-free, baby!
-For Michigan, they get a BCS opponent with some sort of pulse for their big stadium-reopener.

The only loser in this deal, really, is ESPNU, which will once again fall short of its goal to become the official broadcaster of UConn football.

This deal had apparently been building for a few days on the Interwebs, specifically over at MGoBlog - a simply fantastic website devoted to Michigan football. The folks there had been speculating over Michigan's season-opening opponent in 2010.

In a recent update, MGoBlog managed to eliminate the following:

So much for the fun mystery aspect. But now we have confirmation out there, and Michigan fans and UConn fans are free to celebrate together.

Of course, reading the comment section at MGoBlog, I get the sense that UM fans are...less than thrilled:

Man UCONN would be a HORRIBLE game. We all had illusions of grandeur for a huge opponent and per usual they get blown to bits.

It's a lose/lose for UM! We win and no one really cares outside the fan base. We lose and we just lost to a middling to low BCS team from a weak, weak conference. I'd rather schedule a true pansy and just annihilate them.

UConn is worse than WMU. I hope it's not them because a 7-5 team in the Big East does not deserve a home and home.

To that last one I say: maybe, but at least we're better than Toledo.

Not all Michigan fans are so myopic, though. So I'll leave you with this last quote, the insipriation for this post title, which I think would be a great addition to the UConn football media guide:

After tantalizing ourselves with visions of Jessica Biel or Salma Hayek or Catherine Zita-Jones[sic] the last 24 hours, UConn would be like ending up with Fran Drescher.