Share All sharing options for: Okafor becomes relevant once again; well, sort of 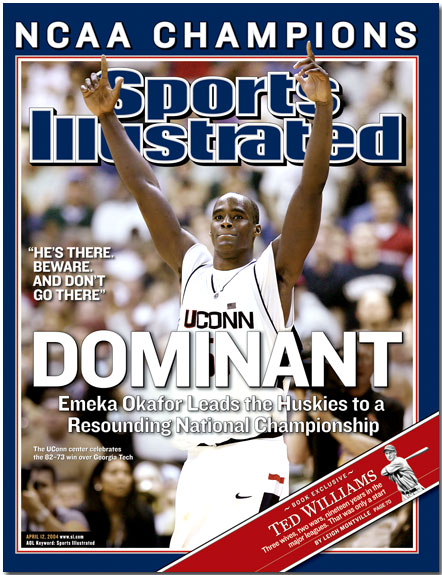 After five seasons of toiling in obscurity for the Bobcats, it appears Emeka Okafor will finally get his chance to become relevant in the NBA.

According to ESPN.com's Marc Stein, the Cats and Hornets have agreed to swap Okafor for fellow underachieving center, Tyson Chandler.

After spending the past few offseasons drowning his sorrows by doing laps at the Tom Petty Racing Experience and wondering if he should just become a stock broker to ease his pain, Okafor will not only get a legitimate shot at the postseason, but he'll also get to play alongside Chris Paul.

Despite averaging a double-double in every season since joining the league in 2004-05, Okafor was (grossly over)paid like a star when the Cats re-signed him to a six-year, $72 million deal in 2008. But despite proving to be a sound, productive player, Okafor has shown he'll never be able to carry a team (looks like the Magic were right after all). Which is fine, because he's proven to be a pretty decent second or third option. But with the band of misfit toys surrounding him in Charlotte, the Cats were never going anywhere.

In New Orleans, though, Okafor could excel. His numbers won't take huge jumps just because he's playing with Paul. Rather, Okafor will probably do exactly what he did in Charlotte -- defend, rebound and score occasionally in the low post -- but he will be doing it for a team that, despite its financial woes, at least has a shot to make the playoffs. So the biggest, and perhaps only difference in making the move to New Orleans is Okafor may be a bit happier. Which is notable, considering he may be one of the nicest guys on the planet.

Even the clubs that traded for him won't see much of a difference.

Chandler and Okafor are essentially the same player: overpaid centers who defend well, are above average on the boards and can score a respectable amount. The only differences are Chandler has a trade-killing toe issue and doesn't score as well and Okafor has a few more years left on his contract while Chandler comes off the books after the season.

Other than that, there doesn't seem to much else to this deal. Actually, everything that 's been written in reaction to the trade can't figure it out either.

Perhaps the Hornets wanted to show Paul that they're at least pretending to appease him by making a deal. But Chandler is said to be a favorite of Paul, and, again, Okafor is essentially the same player. Or maybe the cap-conscious Hornets just needed someone to do their taxes and didn't want to pay an extra salary. Who knows?

While the deal may not make a lot of sense on the surface, Okafor gets a chance to play in the playoffs. In all, he's probably the one winner in the deal.