Are you there, Army? It's me, Randy Edsall

Share All sharing options for: Are you there, Army? It's me, Randy Edsall 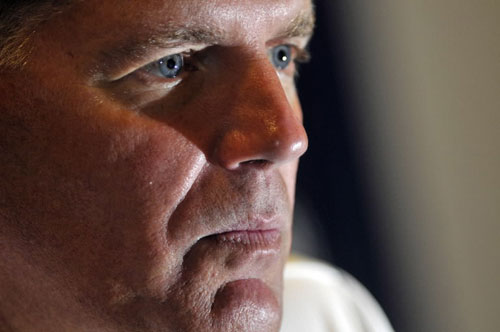 Army and Notre Dame made big news with the announcement that the teams would rekindle their long-standing rivalry in a big way in 2010 -- at the new Yankee Stadium.

Most were excited to see two of college football's most storied programs coming together again, and on top of that, playing the first football game in the house that $1.5 billion built . Well, everyone except Randy Edsall.

Sensing an opportunity to cash in, the UConn coach reportedly tried contacting Army in order to inquire about starting another series. But every time Edsall called, he kept getting a strange answering machine message.

"Though UConn head coach Randy Edsall has said on repeated occasions that his ideal schedule would include a game against Army every season, sources indicated Thursday that Army has not returned phone calls regarding an additional series - including the possibility of playing at Yankee Stadium."

Rutgers has also reached an agreement with the Knights to play in Yankee Stadium in 2011, and with Air Force on tap in 2012, perhaps they couldn't add any more fluff. Or maybe after UConn broke off its agreement with Navy, Army is merely sticking to the "military academy before hoes" unwritten code.

Whatever it is, it doesn't look like Edsall will be getting through any time soon.