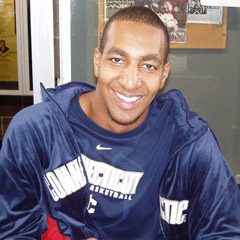 Be still, gentle giant. This will all be over soon enough.

It appears the Dove has been a bit spoiled by the 2.3 minutes a game that were bestowed upon him last season.

After almost losing him in the Dove Scare of '09, it appears we still may be without Jonathan Mandeldove, neither man nor dove, for next season:

"Little-used 7-foot senior center Jonathan Mandeldove’s status for this upcoming season is "up in the air" due to academic issues, according to UConn coach Jim Calhoun. Mandeldove is working in summer school to rectify those issues."

I don't want to accuse Coach Cal or anything, but is it possible that this is merely his latest attempt to give the Dove the boot?

Despite his awesome talent, Cal has cut Dove's minutes nearly in half each season. Cal couldn't get him to agree to a medical redshirt when he seemingly had no injury at all. And now this?

Although I love your iron-fist ruling, Cal, the madness must end.