Could Edwards be the next Hilton Armstrong?

Share All sharing options for: Could Edwards be the next Hilton Armstrong? 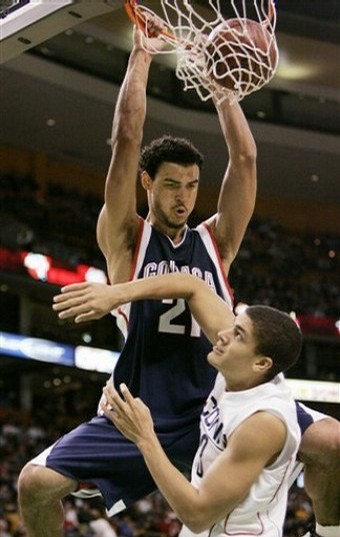 With any hope, Gavin Edwards will no longer cower in fear on defense.

With Jerome Dyson back on the court and set to return for his senior season and Kemba Walker primed to advance to speedwalking, the backcourt is probably one of the best in the Big East, if not in the country.

The frontcourt, though, is in a more precarious position. There's a whole lot of talent, sure. But no one really knows what will come of it.

I've already made my endorsement for Charles Okwandu as the starting center, and it looks like the coaching staff feels the same. Still, I'm not sure the team knows who will be starting yet. My guess is before the first game of the season, Coach Cal will have everyone lineup by height, notice that Big Chuck is the tallest and tell Blane Dog to "Put Emeka in at center." Bound to happen.

The real competition is at power forward. Between Alex Oriakhi, and Ater Majok, whose decision-making skills have reached Favrian proportions, there are about 37 recruiting stars. But, according to a recent story by The Register's Dave Borges, it appears the less-heralded never-heralded Edwards will get the first crack at the starting job. And, you know, I think I agree with them.

"(The coaching staff has) been telling me ... there’s no reason why I shouldn’t have confidence to be able to start and play as well as I have in my best games here," Edwards said.

At first, I was skeptical. Not only do Oriakhi and Majok have far more potential, but Edwards' efforts the past two seasons have been almost Craig-Austrian: He's a safe option that the coaches like but he doesn't really add much of anything.

But then Blane Dog, the wise old sage that he is, said this:

"I think he’s a little bit like Hilton (Armstrong)," Blaney said. "He’s kind of grown into his body, made himself a lot stronger. He works hard. I just think he needs minutes, and he needs to do well when he gets those minutes."

Gavin doesn't have the same defensive abilities (read: height) as Hilton, and I'm pretty sure he'd lose to Blaney in a foot race. But just like Hilton came out of nowhere to become an above average, productive player in his senior season, Edwards, too, can emerge from the depths of Coach Cal's sh*t list to transform into a solid starting power forward.

Edwards' stats obviously weren't great considering he was essentially the seventh man off the bench by season's end, but in 11.7 minutes per game, he averaged 3.8 points -- on an impressive 63.7 pct. shooting -- 2.97 rebounds and 0.75 blocks a game. Nothing to gush about, but nothing to scoff at, either.

Stretch his numbers over 40 minutes and they actually become more appealing. Edwards' averages over a full game balloon to 13 points, 10 rebounds and three blocks. Not too shabby.

Obviously, you have to take those stats with a grain of salt, the projections also can be quite telling.

After his freshman season, Jeff Adrien projected to average 16 and 12 on a per-40-minute basis, and went on to average 13.8 and 9.6 rebounds over his final three seasons. And after three seasons riding the pine, Hilton Armstrong projected to average 12 points, 11 rebounds and four blocks after averaging 3.8, 3.4 and 1.2 in 12.4 minutes per game his junior year. And, as the tale goes, he transformed into a player who averaged 9.7 points, 6.6 rebounds and 3.1 blocks per game as a senior and one who, for some reason, was worthy of the 12th overall pick in the draft.

Edwards' projected numbers, like those of Adrien and Armstrong, will almost certainly be lower than the ones projected for him over 40 minutes because no player is on the court for 40 minutes. But give him starter's minutes -- let's say 30 a game -- and the production is still solid: 9.7 points, 7.6 rebounds and 1.9 blocks a game.

Those numbers won't put him in the running for any awards, but they are pretty decent for a starter. His 9.7 points per game may be ho-hum, but 7.6 boards a game would have made him the 14th-best rebounder in the Big East last season, and 1.9 blocks a game would have put him in fourth place in the conference.

However, that doesn't mean all of the questions surrounding Edwards will suddenly disappear, especially on defense. If the NCAA kept track of the number of times a player is shat on during a game, Edwards would undoubtedly lead the league in shats.

But I'm not ready to label Edwards as a bad defender. There aren't really metrics that keep track of these things, but from watching him the past two seasons his main issue seems to be the one that his hindered all facets of his career thus far: confidence.

A lot of defense has to do with instincts and that kind of killer instinct mentality. You need to be smart and instinctive enough to know when to gamble, when to slide, etc. But you also have to be kind of cocky and have that "No one is getting by me" mindset. Sure, athleticism and a couple of inches don't hurt. But one of the reasons Dyson is such a good defender is because he thinks he is.

Edwards is the sweater vest-wearing type off the court, so I don't know if he can suddenly change his personality. Perhaps Charlie Villanueva can set his up with motivational speaker and Twitter pal Tony Robbins. But with the job Edwards' for the taking and the coaching staff reminding him of that repeatedly, it may just happen. At least, that's what Blaney and Edwards hope.

"When your confidence catches up to my confidence in you," associate head coach George Blaney likes to tell Edwards, "that’s when you’re going to become a player."

"I think I’ve kind of come into my own now," Edwards said after a weight-lifting session at Gampel Pavilion. "I’m ready to kind of believe in myself the way that everybody else on the coaching staff does."

The big three of Dyson, Kemba and Stan can be very potent offensively. But that also means there might not be a whole lot of shots to go around. Dyson, a notorious chucker, shot just 40% from the field last season, and had he played all 36 games, he would have taken 371 shots (third highest on the team). Stan somehow shot 50 pct. from the floor, but he has the worst shot selection of any player I've ever seen, especially if he makes a few to start off. And you have to assume Kemba takes more than the 6.5 attempts a game he registered.

With so many shooters, Edwards would serve as a great complimentary piece. As I noted before, he shot 63.7 pct. from the field (second to Thabeet's 64%, third best in the Big East) and had a solid trueshooting percentage of 66.9, so he can still produce with limited touches.

And while the big three brings the thunder on offense, Edwards has a knack for doing all those little things that make a team well-rounded. He hustles, gets boards (he had a 13.05 rebound rate in 2008-09), blocks a few shots, takes charges -- all those lame things no one really cares about, but probably actually make a difference in the long run, he does.

"[Okwandu]'s a baby offensively, but when you have Kemba (Walker), Jerome (Dyson) and Stanley (Robinson), you’re not looking for a ton of scoring from that position. And then Gavin gives you that, almost a 3-man at the 4 position, who can handle, screen, pick, run and pass and do a lot of things, (the team) becomes very versatile."

There's no doubt that Majok could vastly improve the team's offense in ways Edwards may never be able to. And although Oriakhi hasn't played a single NCAA minute, you read all the clips and automatically assume he's the heir apparent to Adrien. The easy thing is to gush over their potential and forget about a player like Edwards.

Edwards is the safe option. And for once, I'd rather go that way.