Tebucky Jones Jr. tries to convince UConn of his potential, one second-degree charge at a time

Share All sharing options for: Tebucky Jones Jr. tries to convince UConn of his potential, one second-degree charge at a time 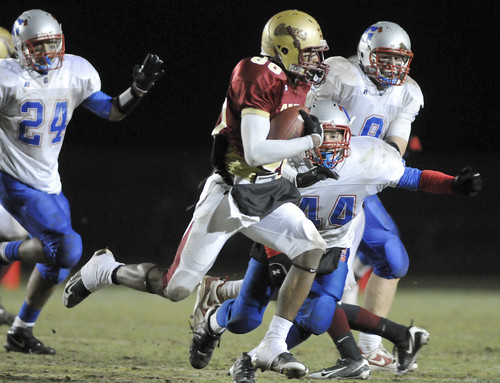 Hard-hitting Tebucky Jones Jr. about to get hard-hitted. (Courant)

So naturally, UConn has shown interest.

Well, just as soon as those six charges against him are dropped:

"Tebucky Jones Jr., the 6-foot-1, 180-pound wide receiver entering his senior year at New Britain High School and being recruited by various Division I schools — including UConn — was arrested on May 7 and faces numerous charges.

"Jones got into a fight with a fellow student at New Britain High, according to the New Britain Police Department. At the time, the student did not want to press charges but the school did and he was charged with disorderly conduct. On May 14, the victim decided he wanted to press charges and gave police a statement, saying he was attacked by three kids and that Jones was on top of him and grabbing him by the neck. Jones allegedly slammed the victim to the floor and into a locker room door, according to police."

The very day the Hartford Courant ran a glowing little piece in print on Jones and the Huskies' potential interest, this little diddy appeared on its Web site. The alleged charges against him include: second-degree assault, second-degree strangulation, first-degree unlawful restraint, second–degree reckless endangerment, second-degree conspiracy to commit assault and second-degree breach of peace.

But that doesn't necessarily mean UConn is jumping ship. Desmond Conner, who seems to be pretty tight with the elder Tebucky, assumes that since the incident happened two months ago, Big E et al. likely already know about the incident and must still be interested. But I'm not so sure about that. It's possible, but if they were just starting to recruit him, they might not have gotten that far yet. Who knows?

Still, there are a lot of factors pointing in UConn's favor. Jones Sr. seems pretty enamored with UConn, saying that if it wasn't a D-IAA team when he was chosing schools, he would have been a Husky. He also has ties to coaches and former Orange people Terry Richardson and Scott Lakatos. And while Jones Jr., 6-1, 180, has a lot of big-name teams up on his Rivals profile, what I've heard and read about him in the local papers show he's probably not raking in the D-IA offers; he totaled just 530 yards and 8 TDs last season.

And now with a rap sheet, he seems like a perfect fit for UConn.