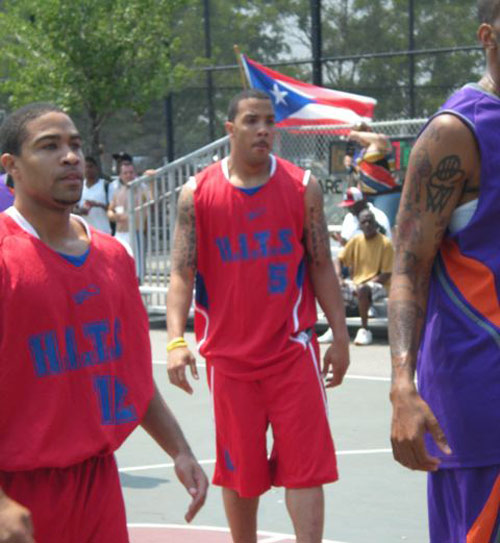 Marcus Williams at Pirates Arena (also commonly referred to as the park down the block).

After the Pistons one-upped Memphis with the signings of Gentle Ben Gordon and Charles V., the Griz stealthily struck back in the UConn arms race, granting Puerto Rican League All-Star Game MVP Marcus Williams a spot on their summer league team.

You may remember Williams from such films as "Who needs talent when you’re completely unmotivated?" and "Take the blame, A.J., so I can come back and play in the second half of the season." Well, after falling out of the league this season and ending up in Puerto Rico, Williams accepted Memphis' open invitation to any former UConn player and is ready to make his comeback.

And since he never really "made it" in the league to begin with, Williams has essentially become the Mark Morrison of the NBA.

Perhaps his Draft Day plummet was a sign of things to come, or maybe he was just cursed as soon as Jay Bilas, who hasn’t seen an NBA game since 1996, called him the best point guard in the ’06 draft. Either way, Williams somehow managed to have a star-crossed career in only three seasons.

To be fair, he was in a bad position from the start, as he was drafted to be Jason Kidd’s caddie in Jersey. Then, despite hearing Nets president Rod Thorn giggling on the other end of the phone, the Warriors traded a conditional first-round pick for him in 2008. Without a true point, Golden State seemed like a pretty good landing spot for him. But after playing in nine games and averaging 1.3 points over 6.0 mins. per game, he became one of the many players with which Nellie grew tired, and Williams was thrown out on the street.

Somehow, he ended up in Puerto Rico (likely by handmade raft) and played mui beuno for the Quesadilla Pirates.

Now Williams, the No. 22 pick of the 2006 draft, will attempt to make his comeback alongside Hasheem Thabeet and Summer League polygamist Jeff Adrien. For the sake of all that’s ironic, Williams, who left school early and was once thought to project well to the pros, is now pretty much on the same level with Adrien, an undrafted free agent who was essentially a role player on the ’04 team.

But like I’ve said for both Thabeet and Adrien, the Griz present one of the best opportunities in the NBA for players struggling to make a team. Memphis is so terrible, it's always looking for talent because, well, they have none. And the one thing Williams does have is talent. His first three seasons have been riddled with bad luck and missed opportunities, and I’m sure his glowing personality hasn’t helped much, either. But he certainly has the ability to at least be a backup point in the L.

I wouldn’t be surprised to see Williams make a team after playing in Vegas. And if he doesn’t? At least Donyell Marshall and Jake Voskuhl know they have a summer home when they’re eventually let go.