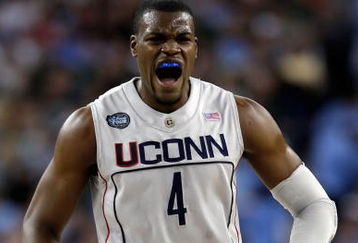 After several Google image searches, I've come to the conclusion that the woyah has only two moods: angry and whoop-ass.

Jeff Adrien doesn't seem like the type to limit himself to one of anything. So it shouldn't be a surprise that the woyah has decided to play the field in the NBA Summer League as well.

While it's been widely reported that Adrien will join nearly every UConn player to come out of school in the past half-decade in Vegas, the woyah will also be strutting his stuff for the Nets/Sixers co-op in the Orlando Summer League.

The more woyah the better, right?

So far, not really.

The Nets/Sixers took on A.J. Price and the Pacers in the league's opening game Monday, and Adrien had a less-than-stellar showing. In just 2:23, woyah had one rebound, one turnover and no points. Adrien, naturally, wasn't too pleased afterward, as evidenced by his use of emoticons.

But it doesn't seem like it will get much better from here. With the Nets and Sixers joining forces to field one team, there seems to be more young NBA players on this roster than most other teams. While teams like the Jazz have just one player who played on an NBA roster last season, the Nets/Sixers have three (Chris Douglas-Roberts, Marreese Speights, Rob Kurz) and two high draft picks (Terrence Williams, Jrue Holiday). Not surprisingly, those were the five players to get the most time on the court Monday.

The situation just doesn't seem to be a good one for the woyah, and there looks to be a whole lot more pine-riding in the future.

But as Adrien pointed out, A.J. had a pretty solid performance. He didn't start, but in a healthy 20-plus minutes, Price had eight points on 3-of-6 shooting (2-for-2 from 3) and tied for the game high in assists, with four. He did have two turnovers, but that's good production for his first game.

Price will get his next shot against the t-shirt-less James Harden and the Thunder tonight at 7 p.m.; Adrien and the Nets/Sixers face the Jazz at 5 p.m. Let's hope that heart-to-heart he had with J.R. Giddens paid off.