The woyah finds a home

Share All sharing options for: The woyah finds a home 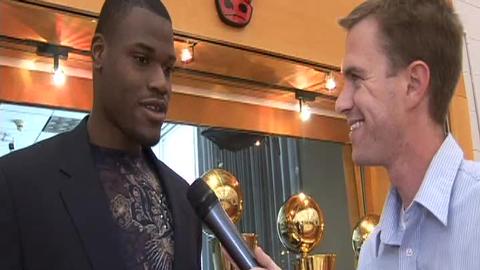 Or more like he set up a cot in the Grizzlies' garage while Lionel Hollins told him to pull his weight or you'll be out on the street.

Either way, Adrien decided the Memphis Grizzlies will be the team with which he will continue his sojourn toward an NBA roster spot, according to the Boston Globe's Marc Spears.

Maybe Hasheem was too busy dying of heat stroke in his air-conditioned hotel room to respond to his calls, but Adrien somehow didn't get the memo that Memphis is the worst franchise in the L.

But I suppose that doesn't matter to much for an undrafted free agent. I guess he should worry about making the team before criticizing its abysmal past. It's like in Scarface, when Al Pacino was proposing that big deal with Sosa to Robert Loggia, and Loggia reminds him it's the guys who fly under the radar that survive. And then the two have a big laugh over how two Italian Americans were cast as Cuban gangsters.

In that case, I guess the Grizzlies aren't too bad a team to sign with. They've been going through a rebuilding phase since 1995, so no one really has a firm grip on his roster spot, and right now, the team is lacking options at power forward. Darrell Arthur and Hakim Warrick manned the position last season, but they're both probably best suited to play the 3. So Adrien could have a semi-decent chance at making the team.

Then again, the Griz reportedly tried to trade for Zach Randolph during the draft -- because the team decided adding headcases was a logical next step -- and with Thabeet in the mix, Marc Gasol seems destined to shift to the 4.

But aside from Warrick, Marko Jaric, shooting guard Mike Buckner and the newly acquired Quentin Richardson, the team doesn't have any other bench player on the books for next season. (Interesting note: Cybertoine, whom I just saw on an episode of "Pros vs. Joes," was their highest-paid player.) Chris Mihm, Hamed Haddadi and Darius Miles are currently the only other options in the frontcourt, but I wouldn't be surprised to see everyone let go.

First-round pick DeMarre Carroll will fill one of those spots, and second-rounder Sam Young will also likley make his way onto the roster. But with players like Mike Wilks and Quinton Ross also coming off the books, the opportunity to make the cut should be there.

There will also be familiar faces in Memphis, as the team has taken note of the awesome forces Coach Cal churns out in Storrs and tried to acquire as many as possible. I doubt Rudy Gay will be in Vegas for summer league action, but Thabeet should be there. In fact, he should probably buy property there. He may be making a few summer trips before his career is over. So maybe Adrien will have a place to stay after all.