Defensive line gets thinner. And not in the good, Richard Simmons kind of way

Share All sharing options for: Defensive line gets thinner. And not in the good, Richard Simmons kind of way 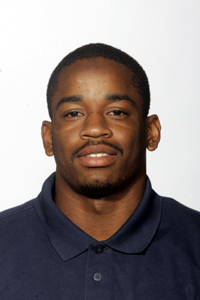 Well, no big deal, because the junior defensive end will not be enrolled at the school nexfor the fall semester, the university's athletic dept. announced in an e-mail today. The Courant is reporting that Campbell, of Bloomfield, was ruled academically ineligible.

With Julius Williams and Cody Brown now in the NFL, Campbell was slated to start at DE opposite Lindsey Witten. His departure leaves the end spots pretty thin. While DT is pretty deep, Witten and Mike Cox are now the only players outside with any experience.

Witten should be able to fill one of the spots, as he's been expected to have a breakout season for about 10 seasons now. But the other side is going to be an issue. The team has a few freshmen who could step in, such as Trevardo Williams, A.J. Portee or Jesse Joseph, or they could move someone from a position with some depth, like linebacker Greg Lloyd or DT Kendall Reyes.

Kendall Reyes started outside, so it's possible he could be the one replacing Campbell. But do you really want to mess up the inside combo of him and Twyon Martin? After taking over for Rob Lunn and Alex Polito, the more ... uh, athletic duo shined. The duo only had 42 tackles and three sacks between them, but considering they were both redshirt freshman, it wasn't too shabby. Plus, ever since they were paired together, everyone's been gushing about their potential; Brian Bennett even put them on his Big East all-freshmen team.

If they're going to follow the Randy Edsall Plan on defense, which requires playing everyone at a position they need 50 more pounds for (i.e., safeties to linebackers, 'backers to ends), this wouldn't make a whole lot of sense; one of the reasons Reyes was put in the middle in the first place was because he has good speed for a DT, but only moderate speed for an end. So it's probably best to just leave Reyes where he is and rely on a rotation until someone emerges.

In addition to Campbell, the school announced four others will likely not be with the team next season. Probably the biggest among them are incoming freshmen Mike Osiecki and Leon Kinnard. Both are recovering from surgery and won't enroll in the school until January. 2010.

Not a huge blow considering they are two-stars that might have been redshirted anyway, but both seem like they have some potential. Kinnard brings a lot of speed and versatility and was receiving interest from pretty much every good eastern team. With 4.4 speed (SEC speed, one might say) he could be involved in Wildcat packages right away or help out in the slot, which is probably where he'll end up after trying to make it at QB.

I think Osiecki, the Connecticut Gatorade POY, could be great, too. But he probably would have redshirted anyway, as linebacker is stacked with depth right now.

Also sitting out will be WR Brian Parker and TB Nathan Sherr. Parker is ineligible while Sherr is transferring to Massachusetts Maritime Academy. Which is fine. UConn is loaded at tailback, and after receivers hauled in a whopping one TD last season, the team definitely doesn't need any help there.