Share All sharing options for: Woe is the woyah (Update 2: Weighing options) 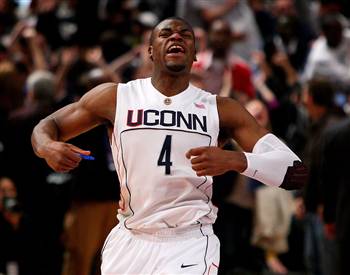 Sixty picks went by, and none of them were used to select Jeff Adrien.

While Hasheem Thabeet was taken by the Grizzlies with the No. 2 overall selection and A.J. Price by the Pacers at No. 52, Adrien's sojourn to the NBA will have to start as an undrafted free agent.

It's not the worst thing in the world. Since second-round picks aren't guaranteed money, Adrien has just as much of a chance of making a team as he would have had he been drafted. This might actually be even better for him. As Blane Dog pointed out, getting him into the right system could really decide if he'll be playing in the U.S. of A. or overseas.

UPDATE: Just read on Adrien's Twitter page that he will be "headed to Cleveland Saturday," which one would assume means he'll be signing with the Cavs. In a separate Tweet, Adrien said the Celtics offered but wanted him to play overseas.

In true woyah fashion, he responded by saying, "not going out like that."

UPDATE 2 (Friday): Prehaps Adrien jumped the gun a bit with his first Tweet. Now the woyah is apparently weighing his options.