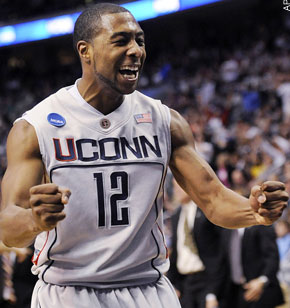 A.J. Price is headed to Indiana.

Fifty selections after Hasheem Thabeet was walking in Memphis in his space suit, Lawrence Bird and the Pacers selected Price with the 22nd pick of the second round (No. 52).

The Pacers went into the draft looking for a point guard, but with four off the board when they were on the clock at No. 11, the team instead went with professional goofball Tyler Hansbrough, the basketball equivalent of a 4-A player.

But that actually works in Price's favor, as it leaves Indiana without an impact player or anyone with a real future with the team at the position right now. The Pacers traded for T.J. Ford, but the former Texas product (shockingly) hasn't really turned out to be what they had hoped for; Ford averaged 14.9 points and 5.3 assists a game, but also turned the ball over 2.4 times a game. Jarrett Jack also saw time at the 1 -- and judging by their depth chart, he and Ford ended up starting in the backcourt together because of injuries -- but he's really not the answer and is a free agent anyway.

Behind them, Travis Diener (who has a player option) is a corpse and Jamal Tinsely is in exile. So unless the team acquires some backcourt depth, Price not only has a good chance of making the team, but he could also work his way into heavy minutes. And with the two-guard also kind of up in the air, he could also see some time there.

The Pacers already have a budding star in Danny Granger, so if the team gets a few more good pieces over the next few seasons, Price could be a part of something good in Indy.

"The Pacers wanted to get a point guard in the first round but couldn't pass on Hansbrough. With Price, they get a solid guard who doesn't do anything spectacularly, but he's steady and they could use that. If Jarrett Jack doesn't re-sign, Price could make the team."