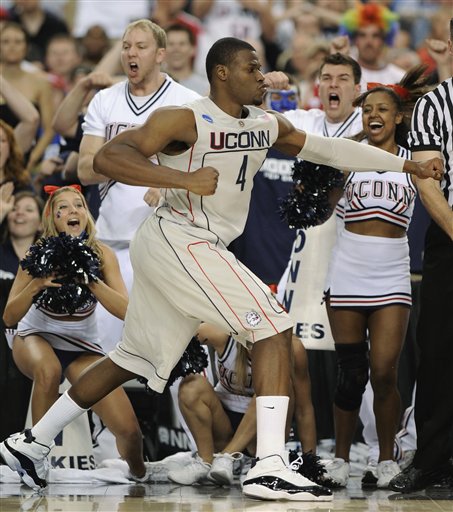 Jeff Adrien is a woyah.

No one can doubt that. It’s a proven fact.

But the senior forward’s past conquests don’t mean much in a league that tends to value upside more than production (see Jennings, Brandon). It’s the same reason Ed O’Bannon now works for a car dealership.

That’s not really a knock on the NBA. Despite averaging 5.5 ppg in Italy, Jennings will no doubt be a better pro than Adrien, or is at least more worth the gamble considering his upside.

Out of the three major leagues, the NBA is probably the easiest to tell which prospects will work well in the pros. And despite nearly averaging a double-double the past three seasons, Adrien’s skills simply don’t translate well.

But that doesn’t mean he doesn’t have a chance to be selected in Thursday’s NBA draft. Or that he won’t be able to have a long career as a bench player.

The woyah will probably never be more than a role player, someone who gives a team a few boards a game in limited minutes. But that’s still not too bad. And, as Blane Dog so astutely pointed out to the New Haven Register, Adrien could end up being slightly more than that if put in the right situation.

Over this past weekend, he had impressive performances for both the Utah Jazz and Charlotte Bobcats – particularly for the Jazz, with coach Jerry Sloan in attendance.

"That would be the kind of coach that he’d really do well with," UConn associate head coach George Blaney said.

Great point, Blane Dog. A Coach Cal-type coach would suit him well, and while he’ll never be a star, he could be a solid rotational player in the right system.

Even if he is drafted and becomes a role player, I think everyone, including Adrien, will be happy. And since we’ve set such low expectations for him to begin with, anything else would be a pleasant surprise.

In spite of all of the obstacles he has to come in the pros and the holes he has in his game, I think Adrien will still be a decent player. Here’s a look at the reason’s for and against him becoming a good pro:

Reasons why Jeff Adrien would make a good pro