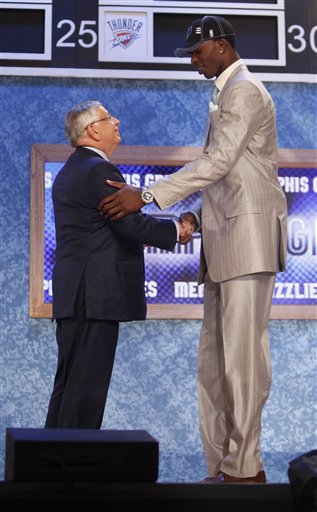 The odds that either Thabeet or David Stern knew what the other was talking about on stage? Probably 6 percent.

Prepare to toil in obscurity, Hasheem.

After the Clippers went through the formality of wasting most of the five minutes allotted to pick Blake Griffin, the Memphis Grizzlies, as expected, selected the UConn junior center with the No. 2 pick in Thursday's NBA draft.

With the pick, Thabeet also ties Emeka Okafor in 2004 as the highest-drafted player in school history. He's also the fifth UConn player to be taken in the Top 5. Okafor, Ben Gordon (third in '04), Ray Allen (fifth in '96) and Donyell Marshall (fourth in '94) are the others.

After doing the podium deal -- looking mighty daper in a platinum ensemble that made him look like an astronaut -- and being run through the media wringer, Thabeet and Griffin wept in each other's arms for a good five minutes before taking off to meet their "NBA" franchises.

Thabeet luckily will have a familiar face in Memphis with which to share his misery in former Husky Rudy Gay. They can have slumber parties together where they tell ghost stories about Blane Dog and when Coach Cal got so made he almost decked Doug Wiggins/Marcus Williams.

With Thabeet now in the fold, the Griz have a seemingly solid, young, NBA Live-esque starting five with O.J. Mayo and Mike Conely in the backcourt, Gay on the wing and Marc Gasol and Thabeet in the frontcourt.

It seems like it, but I'm sure they'll still win fewer than 30 games.