Thabeet trying to muscle the Griz?

Share All sharing options for: Thabeet trying to muscle the Griz? 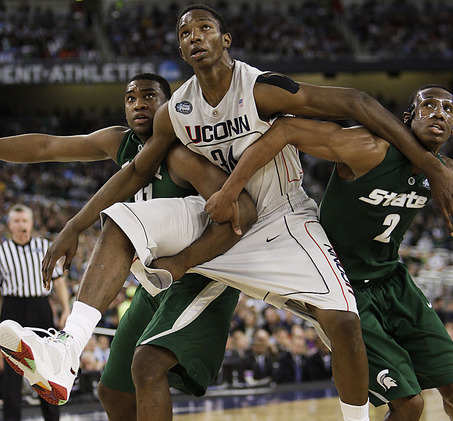 Hasheem Thabeet fought through crotch-grabbing Spartans to make it to the top of this year's draft crop.

Apparently, no one wants to play in Memphis anymore.

Over the past few weeks, Spanish teen idol Ricky Rubio has reportedly been cautioning the franchise against taking him with the No. 2 pick. Arizona State's James Harden apparently performed terribly in a recent workout, and the rumor is he tanked on purpose.

And Sunday, Hasheem Thabeet became the latest of the Griz's draft (workout) dodgers, skipping a planned session with the team because of a shoulder injury.

But some are speculating it was for different reasons.

"The official explanation was a sore shoulder. The unofficial explanation? Thabeet doesn't want to play in Memphis and wanted to stay in Los Angeles to talk Oklahoma City Thunder general manager Sam Presti into drafting him at No. 3."

With another team when he was supposed to be working out for the Grizzlies? Apparently Thabeet has become quickly acclimated to L.A., because that's stuff straight out of "The Hills."

"He's not going to block shots in a workout, and that's what he's going to do in the NBA," Udezue told us. "What are they going to do, have Hasheem shoot 3-pointers? Ricky Rubio is not doing any workouts either."

I guess that makes sense. Thabeet obviously has a ways to go on the offensive end, and most drills that don't require others seem to focus on areas that wouldn't help Thabeet's case.

Then again, there are probably just as many drills designed to show off his skill set as there are ones that don't, and if his agent's reasoning was truly the story, why work out at the combine or for any team? The situation becomes a bit fishier given that Udezue initially told Givony the cancellation was a result of "scheduling issues."

Thabeet also said he wasn't ready to commit to one team just yet, but then was spotted at the gym with Justin Bobby. I'd be dunzo with him if I were the Griz.

The only inside info I have comes from my ESPN Insider account, so I can only speculate on this. But it seems like the cancellation has something to do with the perception that Thabeet wants to stay the hell away from Memphis.

And that would make a lot of sense. The Grizzlies are horrible. And even when they do somehow stumble upon a player who manages to be decent, they trade him for a can mixed nuts and a bag of Javaris Crittenton. (Jeff Teague, this is your legacy. We look forward to making similar jokes in 3-4 years.)

Still, I stick by my comments in yesterday's post and say if Memphis keeps the pick, Thabeet will be the selection. They can't take Rubio, because it will have Steve Francis-esque results, and the franchise can't risk any more embarrassment or the NBA might fold the team. (Gasol and Francis force their way out, no player wants to even work out for them anymore. Seriously, NBA? Can we move this team to Europe already?)

Thabeet, though, doesn't have the leverage that Rubio does. He could always try to revive his soccer career, or he can follow Manute Bol's trail to hockey. But basketball is probably his most lucrative option. So he's stuck with whatever team drafts him.

It's possible that Memphis tries to avoid a possible headache by taking someone like Tyreke Evans -- which would fit perfectly with the team's five-year plan of seeing how many times it can acquire the same player -- or they can work a trade to get out of the spot and (try to) save itself from the potential backlash.

But allowing players push them around and get their way would set a bad precedent, and even a team like the Griz, which is like the Artie Bucco of the NBA mob scene, can't really afford that PR hit.

In conclusion, I don't think this changes much.