Share All sharing options for: Majok withdraws from draft, but questions still remain 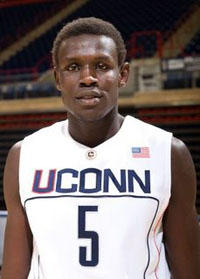 Ater Majok has pulled his name from the NBA Draft. But that doesn't necessarily mean he'll be suiting up for the Huskies next season.

Majok, who was deemed ineligible for the 2008-09 season because of issues with his transcript and will not be eligible until after the fall '09 semester, declared for the draft almost two months ago but did not sign with an agent. In a statement announcing the decision, Majok said that he was doing so with "the full intention of assessing my abilities and returning to Connecticut in 2009-10."

But lately, statements made by Coach Cal, and basically the overall mood surrounding his status, have soured.

According to the Hartford Courant's Mike Anthony:

"'"He's not going to go into the draft, but I don't know what, beyond that, he'll do,' coach Jim Calhoun said over the weekend."

Even though there was virtually no chance of him being selected in the first round -- or even in the second round, probably -- Majok seemed to be seriously considering remaining in the draft and waited for the final possible day to announce his decision to opt out, thereby preserving his remaining four years of eligibility. (Although he probably made up his mind long before, it's worth noting the e-mail from the UConn athletics dept. arrived in my mailbox at just after 4:16 p.m; the deadline was 5 p.m. Monday.)

But the possibility of Majok leaving Storrs before ever playing a single game is still possible. Several local papers have mentioned the idea of the 6-10 freshman playing in Europe, and Calhoun sounded less than optimistic about Majok's future at UConn when talking to The Courant:

"I talked to him [Friday]. He's going to do whatever he feels he needs to do. It's not much more complex than that. I don't think he'll go home. I think it's either [UConn] or Europe. I'm not trying to [get a feel for which way he's leaning]. The other kids are coming to join our program. You have to want to join our program. And I think Ater does, but he has a lot of responsibilities."

These vague "responsibilities" could be what eventually sway him either way. He's a Sudanese refugee who lived in Egypt before moving to Australia, so money is likely a big driving force. And as a 21-year-old with only half a season (albeit the more important half) of basketball to prove himself to NBA scouts, he may not have the patience to sit around and wait.

Then there are his alleged ties to Josh Nochimson. It's possible that if Majok were to return to UConn, the NCAA could hit him with penalties or suspensions before he hits the court, further denying him the opportunity to play competitive basketball (something scouts say he desperately needs) . Since getting to the NBA is clearly a priority, why not save himself the trouble of dealing with possible setbacks and play overseas for a few seasons? There, he can both progress and earn money to support his family.

Scouts seemed intrigued by Majok's size and potential, but after struggling in scrimmages and in live action, the general consensus was, like Hasheem Thabeet, he needed a few seasons to learn how to use his tools.

Calhoun's comments can be so complex, confusing and usually bogged down by Ricky Moore stories. But at the same time, he usually can't hold much back, and surely seemed to tip his hat on his true feelings when he told The Courant, "You have to want to join our program." Thus far, it doesn't seem like it.

Calhoun's statements are part of an agitated vibe the program seems to be giving off on the matter. The ever-blunt Calhoun sounding more perturbed than usual, and even the athletic departments e-mail announcing Majok decision was short, and almost sharp: "University of Connecticut freshman men's basketball player Ater Majok has removed his name from the 2009 NBA Draft. Thank you." Now, there's not much to say about a freshman who never played a game, but the announcement was quite different than the one they sent out to announce his declaration for the draft.

All speculation on my end -- and I'm aware I'm beginning to sound like a conspiracy theorist -- but there just seems to be a strange vibe to this whole thing, like everyone knows what will ultimately happen, but they are going about the formalities and saying/doing the right thing because they have to.

If Majok does end up leaving, it would put a significant kink in Cal's plans for next season.

Barring some unforeseen coming of age by Gavin Edwards or some rapid development by some of the younger players in the first month of the season, Majok was going to be a starter. And if he's as good as most thought he was coming into the program, he can be an impact player.

The backcourt is in great shape, with Kemba Walker assuming the starting point guard spot, a perhaps less-kamikaze-esque Jerome Dyson at the 2 and Stan at the wing, and a combination of Jamaal Trice, Darius Smith, Jamal Coombs-McDaniel and maybe Donnell Beverly providing backup. (Man, they'll be counting on a lot of youth and inexperience off the bench.)

But the backourt is a mess. Will Gavin no longer be frustratingly mediocre? Will Big Chuck continue to be tall? Will Alex Oriahki make an impact as a freshman? Will the Dove finally fly?

Majok was supposed to alleviate at least some of the concern there, as Cal seemed pretty confident that Majok could step in and make an impact right away. Now, there are a lot of possibilities, but nothing reliable.

So UConn's future, just like Majok's, has a lot of questions.

Most importantly, though, this could put the program's chances of luring Majok Majok to Storrs in jeopardy. And that's too much Majok magic to lose in a one-year span.