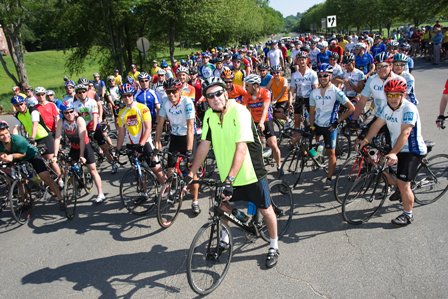 Hell's Angels, watch out. Coach Cal is on the streets.

After cancer tried and failed to take Coach Cal down three downs, a renegade bicycle took a shot at trying to conquer the toughest man in America.

But even after breaking five ribs, the mighty Calhoun dusted off his revealing, skin-tight bicycle shorts, looked the bike dead in its spokes and bellowed, "I have some advice for you ... shut up!" before hopping back on it and riding off (50 miles) into the sunset.

However, the aftermath of Cal showing he is invincible wasn't so pleasant. Calhoun, who flipped over his handlebars after hitting a pothole during his annual charity bike race, collapsed and had to be helped to his feet. The cause, luckily, wasn't cancer-related, but simply a case of dehydration. You know, the kind of dehydration that is likely to occur in a 67-year-old who bikes 50 miles with a few broken ribs.

The Courant's Mike Anthony was the lone reporter on the scene:

"But that smile, in an unnerving instant, was soon wiped away, replaced by a blank expression. Leaning against a gray Audi parked near the finish line at the Simsbury Performing Arts Center, Calhoun slumped, his knees buckling, and fell to the ground as two friends reached for him."

Calhoun was eventually taken to the Health Center that Cal built, and is said to be doing OK.

"'We have one-word descriptions for conditions, and it doesn't get any better than 'Good'," McGuire told The Courant. "He's healthy. He's feeling great, his spirits are great.'"

Apparently this wasn't the first time Cal had a brush with death at a charity race. According to The Courant, he injured his arm in 2007 after clipping handlebars with another rider. And last year, Calhoun could only complete 31 miles because his wheel was too big for his bike.

Just goes to show you that Cal brings the same type of ferocity to the charity biking scene as he does to the court. And that he apparently probably has a few coordination issues.

But all turned out fine. Funds were raised. Former UConn stars with nothing really going on any more mingled. And Coach Cal showed he's the toughest man in history.

And after helping their former coach to his feet and sending him off on his way, Ray Allen, Kevin Ollie and a few other former Huskies celebrated by playing a game of stick ball with a group of children.