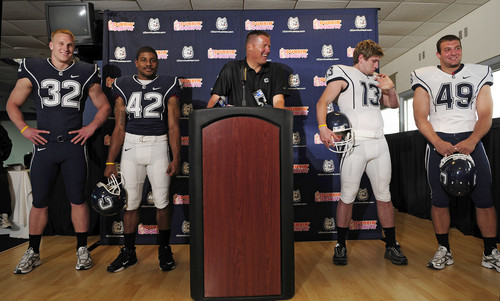 This, unfortunately, is what your 2009 Huskies will look like. (The Courant)

A few days ago, I heard that the football team would be unveiling a new batch of uniforms with a more "traditional" look.

I couldn't help be a bit skeptical. But instead, I decided to give the athletic dept. the benefit of the doubt and wait until they were officially introduced to form an opinion.

Today, the team's four captains displayed the new look for the 2009 season and I was instantly struck with two thoughts:

And 2.) Those aren't traditional at all.

When the word traditional was thrown around, I initially envisioned jerseys like those at Alabama, Penn State and Texas -- solid colors, no piping or any design at all, really.

But I think someone at UConn might have confused "traditional" with basic. Either that, or ugly.

I was always pretty indifferent about the previous jerseys. The gray bands around the shoulder pads seemed unnecessarily large, but all in all, not a bad look. And a big improvement from the Aeropostale-sponsored ones with the C in 20 places from the Dan O. days .

These, though, just aren't doing it for me.

And as a devout follower of the blog Uni Watch, I feel it's my duty to explore the problems with the new garb in-depth. 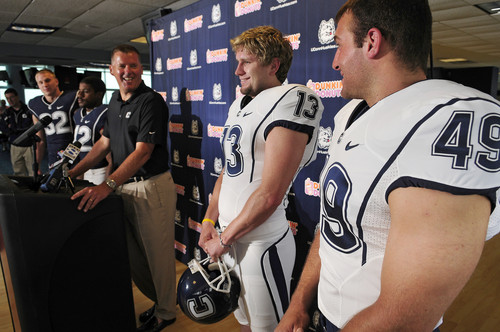 New jerseys: The biggest issue with the jersey, and the new uniform in general, is there's no real direction. It seems like they wanted to embrace their tradition, but soon realized that A) There isn't really any tradition to embrace and B) the uniforms from the past just aren't that great. So they went with the blandness normally associated with traditional outfits and haphazardly threw a few stripes and piping to give it a little something extra.

Problem is, it all looks terrible.

The number font is pretty similar to what was on last year's, but looks a bit crisper, partly because of the new fabric used. It also appears to be a bit more rounded (check out the 3s in both cases).

The word "Connecticut" was also removed and the numbers were placed a bit higher, but I'm a bit indifferent about all that. It was OK on the old ones, but a tad unnecessary. They did, however, keep the "C" nameplate near the collar, which I always thought was a nice touch. But on the blue home jerseys, the "C" kind of just hangs there awkwardly underneath a too-thin white line around the neck line.

And now, the shoulder piping. I have no idea what the thought was on this. It's atrocious. It seems like it was just thrown in there to add a bit of flair to a very basic look, but only makes things worse. The biggest issue -- aide from that it exists -- is that it just ends parallel to the bottom of the numbers. If you look closely on the white ones you can see there are subtle white lines that kind of outline panels on the stomach that probably do something with sweat or something. But no one is going to see that on the field, and they already cannot be seen on the blue ones.

Also a problem is the way the stripe angles outward toward the shoulder numbers. I'm not sure there's a solution to this problem -- a vertical line would be just as bad -- but the way the white piping angles outward just seems odd and out of place. And when it gets down to the numbers, it makes everything look scrunched together; in some cases, it looks like the piping is touching the numbers.

Oh, and one last thing: Can we put the names on the back already? I mean, come on, Randy. The whole "team over individual" thing is noble and everything, but does someone not having his name on his back really temper his ego? And if the player was good enough (a la Donald Brown last season) wouldn't we know him without having the name on the back, singling him out anyway?

All it does is make it really annoying to watch a game -- especially live -- because you tend to confuse players. I get that you think that's the goal, but it's really just a pain in the ass. 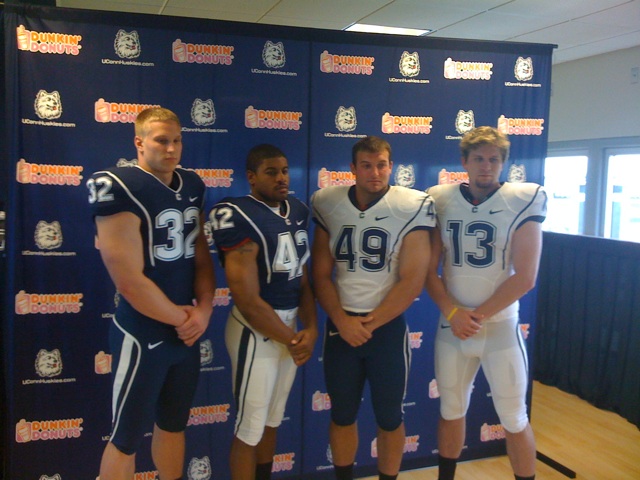 New pants: While I didn't mind the old jerseys, the pants design was a different story. Following the same oversize, lava lamp design featured on the shoulders, the pantaloons just didn't have a great look to them.

The new design is slightly better than what's going on up top, but still has many of the same problems. Like the jerseys, the pants also try to force together classic and trendy. They have one thin line that appears to wrap around the players' tuckus, a design somewhat similar to what Nike has churned out for other teams. But then there's that big thick stripe, common in most styles today, that kind of comes from nowhere. Like the number font and the ugly piping on the jersey, the thin pants stripe has more of a curvy, sleek look to it that basically flows with the rest of the uniform. But the thicker stripe is just a vertical line that doesn't fit wtih the rest of the design.

And to pick some more nits, there really isn't much flow between the top and bottom of the uniform. Sure, the thin piping appears in both areas. But if you want to go with the thick-then-thin look on the striping, why not do the same with the jersey? It can been seen somewhat in the white jersey, because, if you notice, there appears to be a thick blue stripe at the end of the sleeve. But it's gone on the blue. If you're going to go with a bad design, at least be consistent.

Verdict: Not as bad as the jersey, but still pretty bad.

Color: Is it me, or does the blue used look to be a shade darker than the previous unis? It could just be the fabric (the old ones appear to use a more traditional mesh) but the new ones look a hair darker.

But the issues here aren't the colors themselves, but the way they are used. Monochromatic is just terrible, and it appears the team will at least use the one-color look at least some of the time next season. I don't mind getting rid of the gray. I was always a bit confused as to how it surpassed red as the accent color. But I would rather it than to go with a solid blue or solid white design. Just look at the way it hurts Texas' unis. The burnt orange on top of the white looks great, but the white-on-white away jersey just looks bland and lifeless.

At the same time, though, the blue on white looks a bit odd, too. Although there isn't a great solution, I would say the only way around this is to go blue-on-blue at home, white-on-blue for away games.

Verdict: The colors are standard UConn, but the combinations need work. 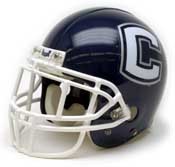 Helmet: Luckily, they kept the old design. So no qualms here.

Final Thoughts: There are really only two, fairly obvious ways a team can go for its uniform design: traditional or modern.

However, somehow, the Huskies have managed to do both. And the results are really, really bad.

Trying to embrace traditon sounds like a good idea. All of the teams that essentially set the standard for what a program strives to be (i.e. Florida) usually have that traditional look to them. But that's because they have a tradition of excellence and therefore have a reason to honor and remember it.

That just isn't going to work at UConn. Do you really want to remember a time when 60 percent of the the school's population was bovine?

Why not just try to go ultra modern instead? Oregon may be an extreme example, but kids want to go to places like that simply because of the uniforms. Since you have no tradition in the first place, why not try to get an edge by pumping out trendy, good-looking uniform designs? It's worked with the facilities.

Verdict: It's fine if you want to update the fabric for breathability, moisture evaportating, or whatever to try to get some kind of an edge. But a clearer direction, and just a better design in general, is needed. Let's hope they put these on the scrap heap after this season.