Share All sharing options for: Donald Brown's awful couch is headed to Indianapolis 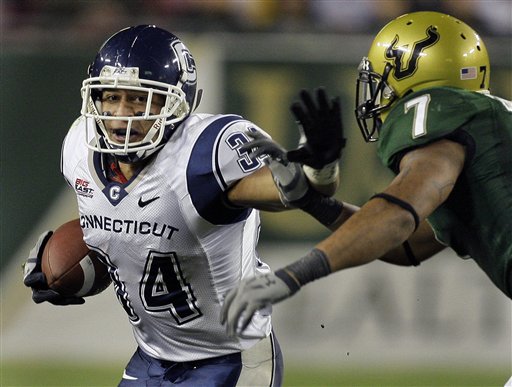 Well, this is a nice surprise. Donald Brown has been taken by the Indianapolis Colts with the 27th pick of the NFL Draft. I don't remember hearing the Colts as interested in Red Bank Catholic's pride and joy, but there we go.

--UConn's first first-round pick, ever (WOO NATIONAL PUBLICITY!)
--A chance to back up/learn from Joe Addai, a Pro Bowler
--Isn't DB II, with his speed and vision, a perfect fit for running the Colts' patented stretch play?
--He was the second running back off the board, behind Knowshon Moreno but ahead of Ohio State's Beanie Wells.
--Peyton Manning
--The Patriots didn't get him.
--We got to see the Brown family's awful light-blue pastel couch. If you saw it, you know what I'm talking about. And if you've got a screenshot, even better. Even Keyshawn Johnson thought it was tacky ("He's gonna need to buy a new couch").

ESPN guys gave UConn a lot of nice words, even the strangely-curmugeonly Steve Young (who happens to have been my favorite player growing up. Thanks for not killing my hero-worship, Steve!).

That makes today a pretty cool day in UConn sports history, all things considered. And even better - OT Will Beatty and CB Darius Butler seem poised to be picked sometime soon in the next few hours.

(8:14 p.m. -- Butler goes 41st to the Patriots, which was not altogether unexpected. Bill Belichick was at UConn's Pro Day and was all kinds of complimentary of the program. Good fit for D-But.)

(9:39 p.m. -- Beatty goes to the Giants at pick No. 60 to end a stellar day for UConn football, leading ESPN to show this mind-blowing graphic:

Most players taken in draft, by team:

Somebody in the football office, please print that on a T-shirt and send it to a rising high school senior. Thank you.)

(9:48 p.m. -- Wait a dang minute, we apparently ain't done yet. Cody Brown gets picked at No. 63 by Arizona, at the very tail end of the second round. That's pretty awesome. Brown should fit in nicely since I believe Ken Whisenhunt's team plays a 3-4 scheme.

For UConn, that now makes four guys taken on Day 1, just one short of USC. Is there any doubt that Storrs is the new Miami?)

Until then, I'll be watching X-Lot start to fill up from my hall 150 feet away and pre-ordering my authentic Mark Sanchez jersey.