Thabeet being subtle about draft intentions

Share All sharing options for: Thabeet being subtle about draft intentions 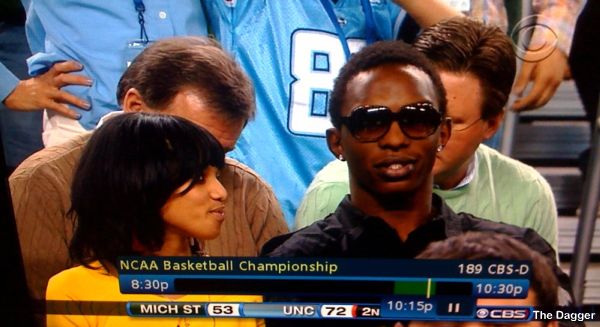 It's widely assumed that after three seasons of rejecting an absurd amount of shots and then staring down opponents to make them feel worse about it, Hasheem Thabeet will make the jump to the NBA. He's toyed with the idea the past two seasons, waiting until the deadline had passed last year to officially announce his return, and with a weak draft class headed to the pros this season, Theebz is a considered top-5, maybe top-3 pick.

In spite of all this, I think everyone has held out some hope that Thabeet will for some reason forgo the pros one more time.

Perhaps it's time to let go of those hopes.

While the rest of the team returned to Storrs following UConn's loss to Michigan State in the Final Four, Thabeet stayed in Detroit with a gal pal to watch the final game, providing us with this delightful photo of him in what appears to be ladies sunglasses.

Ever since, Thabeet reportedly has been jet-setting around the eastern US of A.

The other day he was seen in a fancy New York club, where he unknowingly snubbed swimmer extraordinaire and marijuana enthusiast Michael Phelps.

And according to an AP reporter who has apparently been intently keeping track of Thabeet's Twitter feed, the big fella was in Miami the other day dining on some fancy cuisine. In case you are not a UConn student, I'd like to point out there is still about a month left of school.

"At The Forge For Dinner!!! I didn't know food could be so expensive. ... Ahhhh LOL!!" Thabeet wrote on his Twitter site, according to The Associated Press. "Enjoyin MIAMi tho. Fancy Life, Fancy Cars. ... Mhmmm."

Now, as you may remember, one of the reasons Thabeet wanted to leave school after his freshman year was to help out his family back in Tanzania, which hasn't been doing too well financially. But apparently Thabeet now has the money to fly to Florida and go to restaurants where even the wine guy wears Master P-style bling and, according to this random Miami tourist site, entrees start at $27.

The Detroit Free Press for some reason also wrote a blurb about this and asked UConn SID Kyle Muncy how Thabeet was funding these things, and Muncy had no idea.

People who have seen Thabeet outside of games know that the junior center's wardrobe has progressively become fancier the past year or so. Or as Theebz would say, "Swaggerliciousnessaholic." I'm sure he has some kind of income -- I know players get some type of allowance each week or something -- but there are several time I've seen Thabeet wearing some pretty upscale-looking garb.

But this trip to Florida kind of takes it to another level. I always assumed that the clothes were a sign that Thabeet was preparing to leave this year, that he was spending money now because he knew he had a big pay day in the near future.

But jet-setting on, I'm assuming, a school night ... after bedtime?!