Share All sharing options for: Marcus Williams needs a home 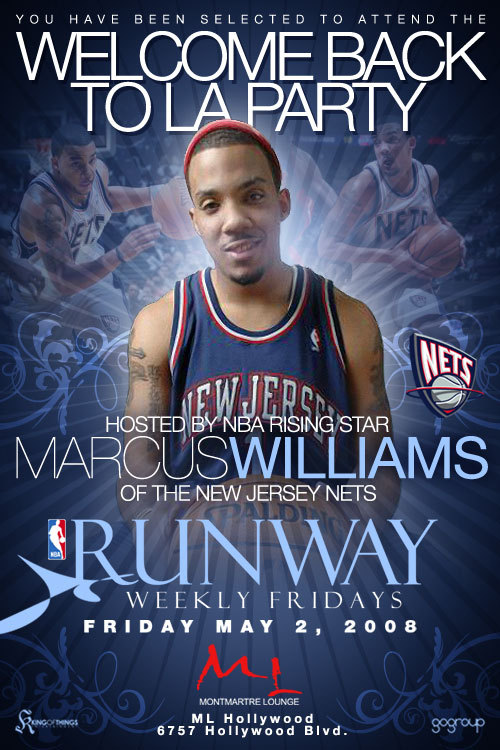 Seriously. How do people keep their headbands on top of their heads like that?

While sifting through my daily cycle of blogs and web sites, I happened to stumble across an NBA newser that immediately caught my attention.

I was a bit puzzled at first. I knew Williams had been struggling ever since getting shipped to the Warriors, but getting waived seemed a bit much.I didn't think he was that bad.

I clicked on the link, and turns out it wasn't UConn's washed-up guard, but Arizona's.

But now curious as to what the better, more mousey Marcus Williams was up to, I looked up the Warriors' roster.

OK, strange. Maybe this was just an error?

Turns out, UConn's washed-up Marcus Williams was waived by the Warriors about a month ago and is probably hanging out with Rashard Anderson in the land of misfit well-known college basketball players.

I knew Williams would never be a star in the NBA, but already struggling for a job at age 24? The Warriors probably aren't a good fit for his skill set, but their center is probably 6-foot-4 and Nellie picks a new starter to hate each week. I'm sure if he had the talent, he would have gotten the minutes.

And this also brings up another, more important point: Man, UConn's 2006 draft class sucked. I mean, not only did their apathy ruin UConn's shot at a title, but not one of the four (five, if you count Denham) Huskies from the much-ballyhooed class of 2006 has made much of a dent in the NBA.

Rudy Gay is doing OK in Memphis, but he's really just a stat-stuffer. And it's Memphis.

Josh Boone has had his moments in Jersey, but he's probably a career backup -- especially with Brook Lopez now in the mix. And Hilton ... well, Hilton's still tall. So I'm sure he'll have a job for a few years.

Marcus will probably land somewhere next season. Kevin Ollie still has a job, so I'm confident he can find a spot somewhere. But maybe sticking around at UConn for another season wouldn't have been a bad thing. For any of the '06 early entrees.