State of the program: Did Coach Cal make the right decision?

Share All sharing options for: State of the program: Did Coach Cal make the right decision? 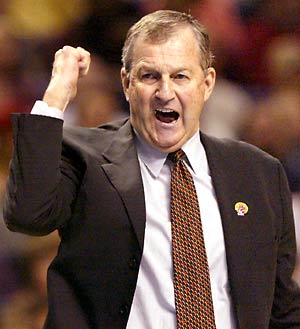 (I began writing this as a reaction post about the news that Calhoun was coming back, but it quickly turned into a rant about Cal and the state of the program. But it pretty much sums up my feelings on almost everything UConn basketball, so here goes.)

I had a strong suspicion that Coach Cal wasn't ready to walk away. He seemed to really enjoy himself this season, and although he probably doesn't have another five-year plan in him, UConn has a talented crop of freshmen coming in that could make the Huskies contenders in the Big East next season.

However, Calhoun will also have a long summer awaiting him with all of these allegations still up in the air.

Perhaps this is a sign that things aren't as bad as they once seemed; I would think at age 66 (almost 67), he wasn't going to stick around if scholarships were going to be taken. Then again, maybe he wants to coach so badly, he's willing to do so in spite of working with a handicap?

Most likely, though, he simply didn't want a 37-year career stained by these allegations, and to walk away with this being the last thing everyone remembers about his career.

Whatever the reason, I for one am happy he's coming back, and I'm sure all of you would agree.

I was thinking about what would happen if/when Calhoun stepped down, and it is somewhat exciting, yet mostly terrifying.

(Read the rest after the jump)

New coaches have somewhat of a novelty effect, at least to me. It's exciting to see Florida get someone like Urban Meyer: a young, charismatic guy with an exciting offense. It gets the buzz going again, and it usually helps people forget why they changed coaches in the first place.

But I don't think UConn is a program up to the level of, say, Kentucky or North Carolina, where they can convince top-10, Hall of Fame coaches to leave places like Kansas to come work for them. Come to think of it, few places are like that; just look at the way Tim Floyd chose USC over Arizona. "Dynasties" are few and far between. It's usually more about singular coaches, and in our case, we happened to hook one of the great ones.

So before this announcement, it was possible -- and is likely in the future -- that UConn would have had to start over and work its way back up to national prominence. And as exciting as it is to have a young up-and-coming coach, there will be a lot of growing pains. Ones I'm not ready to go through. Not with the type of talent the Huskies have coming back; it may not be NCAA-title talent, but a starting five of Kemba, Dyson, Stan and likely Oriakhi and Majok (barring any fallout from the Miles fiasco) is damn good.

At this point, Coach Cal has pretty much earned Joe Paterno rights, and if he wanted to stay 10 more seasons, I don't think the athletic dept. would be pushing him out the door. I don't think anyone would want the same overblown "Is he staying or going?" story that ensues each spring in Happy Valley, but even if it did, he's earned that right. However, also like Paterno, I think Calhoun's age is starting to show a bit.

Much like Penn State football players getting involved in all sorts of trouble, UConn, too, has had a few black eyes over the past few years. From Dyson and Wiggins, to Stanley having to sit out because of eligibility, to the "Not a dime" speech to now this whole Nate Miles fiasco, there have been a lot of cringe-worthy moments. As a young fan, I don't care about that stuff. But as we saw with the dime issue, a lot of people do.

Maybe he's trying to press too hard, knowing that his time is near? And not to accuse him of anything, but maybe he's getting a little sloppy with his recruiting? Journalistic integrity aside, I think all programs sidestep the rules from time to time. I don't want to blindly condemn the entire NCAA or say every single program in the country does it, but it's naive to think stuff like this doesn't exist in all sports. No one wants to admit it, but it does.

We all want to pretend like people like Josh Nochimson don't exist, especially when they're hoisting trophies. It's part of the appeal of sports, and it's the same reason why you want to read about kids overcoming adversity, and so on. But Calhoun (allegedly) isn't the first one, or even the first Coach Cal, to have to go through this wringer. And as someone reminded me after the story broke, the old SEC saying goes, "If you're caught cheating, you're not trying hard enough."

It takes a whole lot to get caught. Just take a look at how long it took for the Yahoo! crew to put that story together. So, if what they say is true, you have to wonder if Calhoun simply is trying too hard to go out a winner.

Calhoun called Miles one of the best offensive players he's ever recruited; he probably would have pushed UConn over the top this year. But there was a reason no one was going near Miles; he was like the plague.

Would Cal have gone after him so hard 10 years ago? Yeah, actually, he would have. Caron Butler shows us that. But if the reports are true, they were still trying to recruit Miles after he was kicked off campus! You would think violating a restraining order in 20 minutes or fewer would have set off a few bells.

Those types of judgment calls have me a bit worried. And it would be terrible to see all of his on-court success tarnished by that. Because right now, he's public enemy No. 1 to every fan of every other team. (Which I plan to remind Kentucky fans when Xavier Henry is seen wearing mink coats in July.)

I understand why fans of other teams -- and even people in Connecticut -- hate him. And this whole recruiting fiasco isn't going to help.

But you know what? That's why I love having him as our head coach. Those Ryan Gomes, "Not a dime" moments are hilarious. And, yeah, they add to the whole ironic side of liking him; it's the same reason we here call him Coach Cal. But they also shows how intense he is about-- well, everything, really.

I just hope that intensity doesn't wind up hurting him, or the program, any further.

There's no more debating whether or not he should come back. Calhoun will be your head coach for at least another season. Whether it was the right call or not, we'll see.

But I for one support the decision. Even a 67-year-old Calhoun with scholarship restrictions is better than almost every other option.

And even though he's getting up there in age and pushing the limits probably further than he should, he's our coach. And I'm glad to have him back.