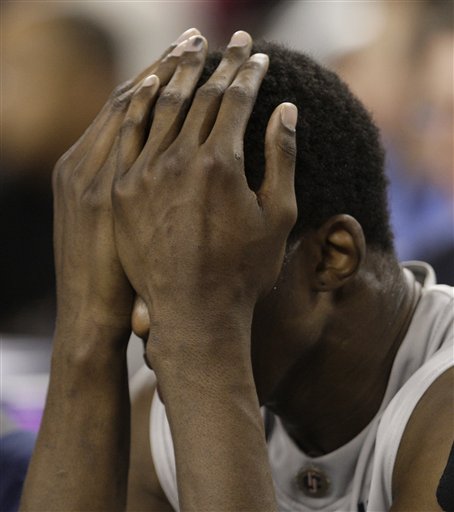 I'll have more time to reflect on that thing that happened Saturday as we move toward the end of the week. Right now, I've got too many mental and physical aches (from traveling 13 hours twice in three days) to put together any comprehensive thought on this 2008-2009 season.

That season, of course, came to an end with an 82-73 loss to Michigan State Saturday night.

UConn's guards played terribly - Kemba Walker missed loads of free throws, and Walker, Craig Austrie and A.J. Price combined for just five assists and seven turnovers. Price got his 15 points, but it took him 20 shots to do it, and he was never the offensive threat that was in the first four tournament games.

The flow of the game never favored UConn, either. Case in point: after the Huskies went on a big run into a media timeout, our student section was rowdy. We were going nuts, yelling at the green-clad fans surrounding us in 360 degrees, even finding Big Red for the "U! C! O! N! N!" chant. Spirits were high, is what I'm saying.

Michigan State, much like they did against Louisville in the Elite Eight, kept it close long enough, then made their run once they started hitting jumpers. They took a double-digit lead into the final minutes, and deservedly so.

Even despite all that, and despite the ridiculous hometown advantage held by the Spartans (Seriously. UConn lost a goddamn road game in the Final Four, just like they lost road games in the 1995, 1998, 2003 and 2006 tournaments. Does North Carolina or Duke ever have to deal regularly with this? And yes, I know who Michigan State is playing Monday night.), UConn was within three after Stanley Robinson's putback dunk with a minute to go. If UConn had just called timeout, or stuck to their men on the inbounds play...

So that was the game.

I wasn't supposed to be going to Detroit. My plan was to spend Saturday night (and hopefully Monday night) on campus to soak up Final Four weekend, Storrs-style. Thankfully, at the last minute, I had sense talked into me and snagged a student section ticket, as well as a 13-hour car ride to Michigan.

(As an aside: Detroit is just not a nice place to visit. Ford Field and Comerica Park are very cool, as was the area immediately surrounding the Renaissance Marriott, our hotel. The rest? Wouldn't go back for any reason.)

As the title of this post suggests, I have no regrets. Nor should any UConn fan that made the trip. Sure, I spent countless hours sitting in an unnatural position in a car staring at the rural splendor of the American Midwest. Sure, I watched UConn bow out playing as badly as they've played all season. And sure, I probably risked a mugging by walking alone wearing a "Connecticut" sweatshirt at 10:30 p.m. on sketchy Detroit sidestreets.

But I at least was in the building to watch the final act of one of the great seasons in UConn basketball history. And though the last two UConn men's games I saw in person were devastating defeats, I don't feel particularly sad. The Final Four is a great achievement. Playing in front of 72,000 fans on the biggest stage in the game is an achievement. For my money, being there and being able to yell for my alma mater will remain one of my great college memories.

There are no regrets on this Final Four weekend. Just a few thank yous:

Thank you, coach Calhoun, for turning this disparate collection of talent into another elite UConn team;

Thank you, Jeff, A.J. and Craig, for bridging the gap from the last great UConn era, and for working your asses off for four years;

Thanks to you folks out there, for following the blog all season long and/or linking to us. We hope you enjoyed us;

And thank you, Hasheem. We all know you're moving on, and we don't begrudge you one bit. You were one of the most fun players I have ever rooted for. Best of luck.

Beyond that, I don't know what there is to say about the Final Four. If I have any particular stories that come to mind, I'll try and put them together into something manageable.

But really, how do you capture the feeling of falling just short of the ultimate goal? How can you describe, as a fan, that moment where your head hangs, your hands rest on the chair in front of you, when you know that your championship-caliber team is rendered powerless to avoid a season-ending loss?

Some expressed it with anger - "Why the f--- did we drive out here for 14 hours for us to suck?!?" - while others sat down in silence.

I was numb. For all of the occasional tongue-in-cheek pessimism around here, I truly didn't think it would end like this. I didn't think that my senior-year-season would end with me joining other UConn fans to offer one final round of applause to Adrien, Thabeet and the rest of the team, who made their way past the student section before ascending the Ford Field stands. (Way too long of a sentence. Sorry.)

Today we all know better. It is hard to win one of these tournaments. Damned hard.

Saturday was Michigan State's day. Our day will come once again. Of that, I'm sure. Until then, we wait out this lingering disappointment and get ready for whatever comes next.