Your introduction to Ford Field

Share All sharing options for: Your introduction to Ford Field 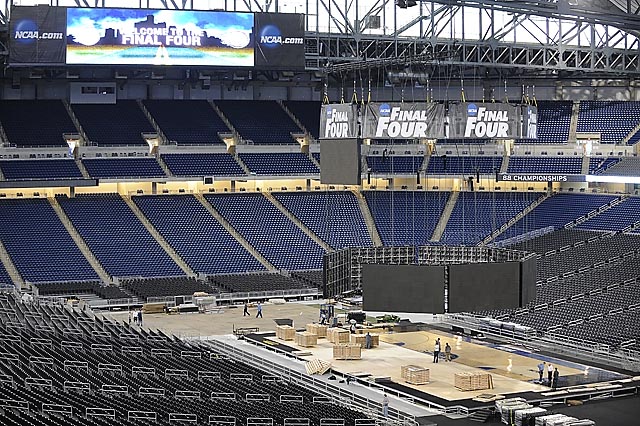 As you may have heard by now, the University of Connecticut Huskies are going to be playing a bit of basketball this weekend at a little thing called the Final Four. By way of an introduction the the last two games of the season, we here at TheUConnBlog.com felt it was appropriate to start with an introduction not of an opponent, but rather of the venue.

So hit the jump for your look at Ford Field and to find out why this weekend is going to be the biggest Final Four ever.

By far the biggest difference fans will notice is the physical placement of the court. Traditionally at NCAA events held in football stadiums, the court is placed in the arena's endzone and a large riser is set up in the middle of the field to box it in with the stadium's normal seats. Not so this year. Instead, the NCAA has opted to place the court along the 50-yard-line, greatly expanding both the amount of seats available. As a result, this year organizers are expecting a record 72,000 person crowd for the games. The previous record was set in 1987, when 64,959 fans watched Keith Smart hit a jumper to bury Syracuse in New Orleans.

Now, if you're saying to yourself, "Wait a minute, 72,000 people in a cavernous arena for a basketball game? That will be a horrible environment." Then you're probably right. However, the NCAA has added one nice feature that could serve as an (admittedly small) mitigating factor. For the first time, the NCAA has gone out of its way to create actual student sections for the games. Each school was allotted 420 tickets directly behind the basket, designated specifically for students. It is not much in the grand scheme of things, but having 800+ students jumping around and yelling next to the court is better than nothing.

Finally, there has been a lot written about how Michigan St. fans could buy up extra tickets and turn this into a giant home game. I don't buy it. First of all, the vast majority of tickets are pre-sold and the rest are given to the schools in equal allotments. But even if 50,000+ MSU fans found their way into the arena, I doubt it would make a lot of difference. First of all, you have the giant football stadium factor to suck the noise out of the air, and more importantly, everyone there who is not a UConn fan was going to be rooting against UConn anyway. Sure, MSU fans might cheer a little harder, but if the game is close down the stretch, you can be sure that both North Carolina and Nova fans will be screaming for the Spartans to get the perceived easier matchup in the final.

A few random notes: Ford Field is going to feature some huge tvs as well. If you check out the picture above, you'll see the eight-sided videoboard that features whopping 65-foot screens on each side. Finally, for those into that sort of thing, click here to find out all the details on the actual floor being used (short version: It's Maple, weighs 21 tons, and takes 8 to 10 people three hours to assemble).