Wait. They really haven't won the title yet? ... Seriously?

Share All sharing options for: Wait. They really haven't won the title yet? ... Seriously? 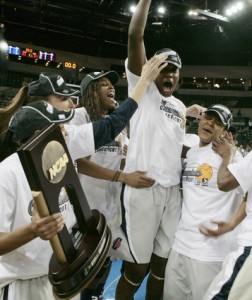 Apparently, they haven't given the women's team the NCAA trophy yet. I know. I'm just as shocked as you are.

In the meantime, the team has been playing slightly more competitive games; after leading by only two at the half, the Huskies edged out Cal by only 24 and Arizona State actually kept the final deficit under 20 points in the Tenton regional final. So, as expected, UConn's perfect season is truly being tested in this rigorous NCAA tournament.

Seriously, though, the women's team moved onto the Final Four last night and will head to St. Louis to take on No. 2 Stanford, winners of the Berkeley region, Sunday at 9 p.m. You may remember the Cardinal from other such films as last year's "The time they ruined our national title season" and "Man, I really wish our team name had an 'S' on the end." But Stanford no longer has Candice Wiggins, who had 25 and 13 when the Cardinal beat the Huskies in a giant peach at last season's Final Four and made me regret watching the only women's game I have watched in the past five years.

When UConn gets past that formality, it will face the winner of Oklahoma and Lewisville, which each received a thrashing at the hands of the mighty Huskies earlier this season.

Although it'd be nice to see an all-Big East championship game, I'll be routing for Oklahoma to see if Courtney Paris will renege on her promise to return her scholarship money if the Sooners don't win the title. If that happens, it will be interesting to see how she's going to pay off her debt with the boxes of Goldfish with which the WNBA pays its players.

Then again, Oklahoma has Ben Roethlisberger's sister on their roster and I find Lewisville coach Jeff Walz to be quite awesome.

Then again, I probably won't watch either way.