Share All sharing options for: Dyson to play Saturday? 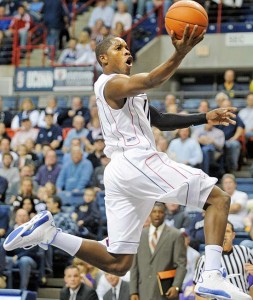 Could Jerome Dyson make his return on Saturday? Probably not. ... But maybe?

Now, I usually don't like to spread rumors. And I tend to stay away from the Facebooks, Twitter feeds and AOL screen names of UConn players. Except for the Dove's. I follow everything of his religiously. But otherwise, I find it kind of creepy.

But on Tuesday night, someone alerted me to the AIM away message of one Jerome Dyson, and I was so overcome with joy, I figured I would spread some of my glee.

Around 10 p.m. on Tuesday, Dyson's status read as follows:

The find comes on the same day that The Courant reported Dyson will forgo his usually dapper suits with dragons on the lapels for a UConn uniform on Saturday and will also take part in pre-game warmups.

However, The Courant's story clearly stated that although Dyson would be in uniform, he would not be playing. According to the story, he is "six weeks into a three to four months of rehab."

He won't play, but he'll be in uniform.

"I am happy about that," Dyson said. "Really happy."

Dr. Michael Joyce, who repaired Dyson's torn meniscus Feb. 16, has cleared Dyson to make layups, take jump shots and participate in pregame warmups - a reward for how much Dyson contributed this season and, more important, a sign that his recovery is cruising along.

BUT! I find it a bit fishy that they'd allow Dyson to dress in this situation. I guess I kind of buy the whole "this is a reward for his contribution this season" argument that the story lays out. But my initial reaction, before seeing his AIM status, was to be a bit suspicious. And I don't know much about major injuries -- the only thing I've broken is my big toe -- but it seems odd that he'd be ready to participate in lay-up lines so soon.

Could this be Coach Cal pulling a Tyler Lorenzen on us? Possibly. (Although I'd like to point out Lorenzen was much further along in his recovery.) Could Dyson's injury be less severe as we/they once believed? Perhaps.

But most likely is a whole lot of nothing and I could just be getting your hopes up. But I figured it was worth mentioning.

UPDATE (9:30 a.m.): I was reminded by this clever shenanigan (via Deadspin) from Hasheem Thabeet that today is April Fool's Day. Have I been April fooled as well? Damn this lame holiday.