Everybody cross your fingers and pray: #1 UConn vs. #3 Missouri preview

Share All sharing options for: Everybody cross your fingers and pray: #1 UConn vs. #3 Missouri preview 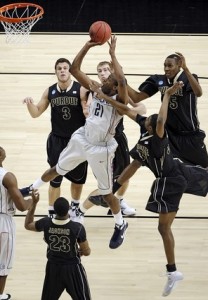 Pop quiz, everybody: Would you characterize this Stanley Robinson play as athletic? A) Yes. B) No.

(No idea if there'll be a liveblog for this one. Justin will have to set that up, I'll be in abstentia from the blog for most of the day. Stay tuned. (NOTE: There will be LiveBlog (J.V.))

We've finally reached the final weekend of March, 2009 A.D. You might know it as Elite Eight weekend. Or not. I don't know what you'd call it. But things seem mostly in order in the UConn world. (Yes, I am clearly ignoring that scandal thing. We'll be spending LOTS o' time analyzing that sucker, but it can wait a bit.)

On the court, the Huskies reached the 30-win plateau for the seventh time ever with their Sweet 16 win over Purdue.

Additionally, UConn is back in the Elite Eight for the 9th time ever, which makes it the third time this decade.

Porter's out in Arizona, enjoying the 80-degree dry heat and standing in awe at the enormous football stadium where Saturday's Elite Eight matchup with Missouri will take place.

Verrier's making nice with the opponent blogs this weekend. (The good people at Rock M Nation are a much more credible source on all things Missouri than I could ever be, so do check them out.)

So that leaves me to ruminate on Saturday. I am strangely confident about UConn's chances this game, and I haven't an earthly idea why.

It can't be because of the matchup. For all the talk about how Memphis should've been a No. 1 seed, Missouri thrashed them Thursday night. Mizzou made Memphis look like a decent team from an awful conference who would struggle in the better BCS conferences. (Hey...wait a second...)

And Mizzou's crazy-up-tempo style does not exactly look like a fun one to play against. With all due respect to the Boilermakers and Aggies, this is the first game in the tournament where I feel like UConn could very easily be beaten in the tournament. It's a scary thought.

Yet my sense of calm can't be due to UConn's history, either. After all, Jim Calhoun is 2-for-7 in Elite Eights. The first one, of course, ended horribly when Christian Laettner (he of the six pro teams, whose NBA career was lame) ended the Dream Season.

The last one ... we don't talk about the last one. In between, there's a couple losses to eventual national champions, and a couple of West Regional titles against a couple of underwhelmingor lower-seeded opponents.

So why is it that I go to sleep on this Friday night with no apprehension?

The answer: I have no idea. Maybe it's a sense of entitlement (also expressed by more diehard fans as "destiny"), that feeling that my team is too good, too deserving to fall short of the sport's ultimate goal, and to hell with the other five gentlemen who will suit up in black jerseys tomorrow.

Maybe I'm just content that all of that "this team hasn't won a postseason game" talk from three weeks ago has now been completely forgotten, and this group of Huskies have made a very respectable and memorable run no matter what happens tomorrow in Phoenix.

And yeah, maybe part of it is a kind of disorientation, knowing what may lay in the future for the UConn basketball program. (Though at least it will likely be less serious than the ShamWow guy's situation. Finally, Billy Mays has the leg-up in the infomercial Cold War.)

Whatever it is, my brain simply cannot concern itself with the ramifications (positive and negative) of tomorrow's game. But despite ramblings of my inner monologue aside, it's time to get PUMPED.

UConn's in the m-fing Elite Eight, people! The Huskies are one step away from playing in the final weekend of college basketball. These are the elusively few moments like these that we fans live for. And the full preview of it is right below that jump:

The media: CBS (TV), WTIC 1080-AM, WHUS 91.7 (radio). Apparently, the NCAA makes you pay a substantial fee to broadcast tournament games on the radio, and then a second fee if you want to stream your radio broadcast online. So those of you who need your HUS fix are out of luck unless you have a physical radio somewhere around your place. Or if you're driving during the game, I suppose.

The Vegas favorite: UConn, minus-6

Series history: This will be the two schools' first-ever meeting. Not to infuriate any Mizzou faithful, but UConn and Missouri might have met in the West Regional final 14 years ago (Was it really that long ago? Man, I'm getting old. I was still watching Salute Your Shorts and Bill Nye the Science Guy back then.), except for noted little bugger Tyus Edney. Don't worry, we hate him too.

A brief rebuttal: Over on Rock M Nation, I noticed a post rather uncomplimentary of our little cow town. How dare they besmirch us! (And yes, I'm aware that I've used the words "bugger" and "besmirch" within like 50 words. BBC America is just tantalizing at 2 a.m.)

You can make fun of our idyllic New England village, or a Daily Campus front page that I believe I actually laid out, or beloved alpaca Charlie Villanueva.

But I draw the line, good sir, about two of your claims:

1) I think I speak for all of us in refusing to claim Moby as an alumnus. My position on this is very clear.

2) We do not "riot" over the Spring Weekend concert, nor is the concert at the heart of Spring Weekend. We "riot" - and really, that was just that one time - at a thing where everyone drunkenly ambles about in a parking lot surrounded by cops. So there.

And while I couldn't tell you anything specific about Columbia, Mo., I can tell you that it looks very nice from the airplane. All very flat and laid out in nice squares.

Check out the game notes: UConn's are here. Most interesting fact: I was unaware until just now, but congratulations to Hasheem Thabeet for reaching 1,000 career points against Purdue. The big fella's also seven blocks away from breaking Emeka Okafor's single-season UConn record, which is frankly amazing.

Missouri's game notes are here, but they're for the Memphis game.

The preview: I usually hate writing this preview part. I find that most pregame analysis - especially from an amateur, like yours truly - is always so vague and general as to be absolutely meaningless.

Let's get down to brass tacks: this game, like every other game, will come down to who hits their shots, who rebounds and who turns the ball over less.

Against Memphis, Missouri was just about unconscious from the field, shooting 53.2 percent overall, and making 27 out of their 46 2-pointers. That speaks to an ability to get to the rim which UConn will have to deal with. Luckily, they are uniquely positioned to do so thanks to the big fella. (As long as he's on the court, that is.)

More impressively, Missouri went to the line 45(!) times. That absolutely cannot happen against UConn if the Huskies want to win this one. Again, UConn is uniquely positioned to deal with this, because they are one of the least foul-prone teams in the country. Hopefully that continues tomorrow.

Rebounding-wise, UConn has the advantage. Adrien, Thabeet and Robinson should theoretically control the boards in this one.

If things go as expected - and in the small sample size of a 40-minute game, they rarely do - that leaves one overwhelming concern for UConn:

A lot of people compare this Missouri team to Louisville's full-court press. But what about this cockamamie theory: are the Tigers at all like the 1990 UConn team?

I have no idea, honestly. Never had the pleasure of seeing them play. I was 3 years old. Maybe some of the old-timers, or people who grew up in Connecticut could educate me. But according to the always-useful "Hoop Tales: UConn Huskies," the Dream Season team was a superbly athletic full-court pressing defense that thrived on turning opponents over.

I'm guessing it's not a perfect comparison, but Missouri sure did suffocate Memphis when they made their big run late in the first half. And Mizzou goes 11 deep in order to make its press work.

So UConn's depth will also be tested. We may actually see Donnell Beverley, a solid ballhandler, get some minutes. It will be vitally important that UConn's big players make themselves available on press break. As we saw against Louisville, the Huskies are capable of running up-and-down with anyone. And if things go well, we might be in for another Stanley Robinson highlight show.

All of this is to say, in closing: if Missouri makes their shots and turns UConn into the turnover-prone team they were late in the Big East season (think Syracuse in the BET), it will be a long day for UConn. Missouri looked capable of running the Huskies (among other teams) off the court on Thursday.

If UConn can beat the press early and get out to a lead, I like their chances. But they will have to slow the game down, force Missouri to take tough shots in the half-court and keep Price and Thabeet on the floor and productive as much as possible. (Hey, look, it's those generalizations I was talking about.)

The prediction: Our old friend, Mariano Duncan, is back! I wonder if he's got anything different to say from the last preview? 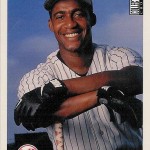 You heard the man. I don't want this ride to end. I hope the Huskies feel the same way. UConn fans have been waiting four years for this program to come up big on a grand stage. Every 2-4 years, a new crop of players get that chance. This is the current team's chance to follow through.

I wish I hadn't written this right before going to sleep, because I have thoroughly pumped myself up.

As always, enjoy the game. And once more, let's go Huskies.