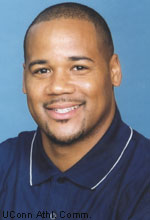 While UConn grinded out a 72-60 Sweet 16 win over No. 5 Purdue in Glendale, Ariz., Yahoo! Sports dropped another bomb on the Huskies' mens basketball program.

According to a second report from Adrian Wojnarowski and Dan Wetzel, UConn assistant coach Andre LaFleur had two lengthy phone conversations with infamous former student manager/quasi-agent Josh Nochimson in 2008 when Nochimonson was known to be with now-UConn freshman Ater Majok.

ESPN.com reported yesterday that Nochimson had ties to Majok and helped shepherd the Sudanese forward through the Kentucky Derby Festival All-Star Game in Louisville, Ky.

Yahoo! is now reporting that LaFleur and Nochimson engaged in three coversations, including two calls of 13 and 44 minutes, during the Louisville tournament.

LaFleur was not with the program in 1999, when Nochimson was student manager, yet the two engaged in "periodic contact" in 2007 and '08, according to the report.

LaFluer essentially became the lead recruiter once Tom Moore left for Quinnipiac in 2007, so it was probably only a matter of time until he somehow was dragged into this mess.

The report also has helped turn what was once seemed like an isolated incident -- or the evidence to prove only an isolated incident -- into a program-wide fiasco. Day by day, it is getting harder and harder to buy any possible defense that Nochimson is just an innocent bystander who is getting caught up in this mess by sheer coincidence. And day by day, UConn looks worse and worse.

At this point, even if violations never come, the damage to the reputation of the program, and Jim Calhoun, has already been done.

The worst part of this new development, though, is that Majok is now at risk of facing repercussions of any wrongdoings by the program. And unlike Miles, who is basically in exile at Southern Idaho and will likely never play for a D-I team, Majok has what most viewed as a bright career in front of him.

As an aside, you have to wonder if Nochimson will ever flip on the program if the allegations are true. (I feel like this turning into a mob sting or something.) He was already in a bind after allegedly scamming Rip Hamilton out of thousands of dollars. Now, he's likely done as a "college agent" (whatever that means).

This is just pure speculation on my part and I have no idea what type of financial situation Nochimson is in, but what would Nochimson have to lose at this point? And that could prove dangerous for the program.

Right now, this whole mess could still go the way of the Reggie Bush scandal and somewhat disappear, leaving only a black eye on the Huskies' 2009 tournament run. But if things continue to leak out on a daily basis like this, or if Nochimson were to come forward, this could get really bad really quickly.