Share All sharing options for: So...uh...back to basketball?: #1 UConn vs. #5 Purdue preview 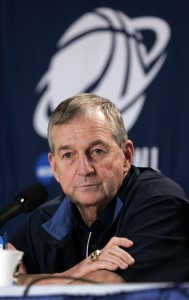 Coach Cal looks tired here. I'd like to just talk about basketball, too.

Well, despite all of the bad stuff that's raining down on UConn at the moment – or, at least, will likely be raining down in the near future – we must turn our attention momentarily back to something much better.

I've personally never been less excited for a UConn basketball game than I am this morning.

First, one thing to wrap up UConn's day of hell: UConn fans are, predictably, searching for every possible hole in the Nate Miles story.

But there seems to be no reason to disbelieve that Tom Moore was aware of the fact that a sports agent – with obvious and easy-to-trace involvement with the UConn basketball program – provided benefits to contacted (Apologies: the report does not make it clear that Moore knew of any benefits) a guy UConn was recruiting. Moore's awareness of that contact is a violation regardless of any of the mitigating circumstances. Nochimson's actions, as a representative of UConn, are another violation, regardless of whether UConn knew or not.

The only way this doesn't get worse is if the people speaking on Miles' behalf can somehow completely debunk the charges that Miles was receiving benefits from Nochimson. A vague blog post from David Borges' blog makes it seem appear that this pushback is in the offing sometime in the future.

Regardless of their punishment (or lack thereof), UConn doesn't look good in this if any of the charges are proven to be true. Moore, given his quotes in the Yahoo story, looks aloof at best. Jim Calhoun is going to end up being dragged through the mud no matter what his actual role was. And even though none of the players on this team – save possibly Majok, but that's a whole other story – are affected by this, I as a UConn fan am.

For now, I'll leave it at that. We're all going to be talking in unproductive hypotheticals until the NCAA actually gets to work on the case. (And if Patterson's statement to Borges was the equivalent of, "UConn's general counsel and the NCAA have looked at the Miles-Nochimson relationship and found nothing that would remove Miles' status as an amateur," and the university backs that up, then we can breathe easier. But right now, we can only infer the meaning of UConn's press statement.)

Now, there is basketball tonight, and I wouldn't be truthful if I said I wasn't anxious to move on. But as I said earlier, I wish I were more pumped about writing a normal preview. Let's see what we come up with, below the jump.

The Vegas favorite: UConn, minus-6.5

Is this school better at basketball historically than UConn? Well, they did have Glenn 'Big Dog' Robinson, and they were a No. 1 seed in the first NCAA Tournament I am aware of following as a young lad.

Then again, so was UConn. So no.

The Boilermakers have been to a pair of Final Fours, much like the Huskies, but they've never brought home the whole shebang. Also, they play in the Big 10 conference, which could rightly be described as clown shoes.

Check out the game notes: UConn's are not up, strangely. They must have something else on their mind over in the SID's office. (Also, a big BOOOOOOO to UConn's athletics office for redesigning UConnHuskies.com to look like every other cookie-cutter CBS/CSTV monstrosity. I've heard people say they hated the old design, but it stood out, and at least it was easy to navigate and didn't have those infernal drop-down menus. The only way it would be worse would be if Jeff Hathaway's greeting video automatically played as soon as you got onto the Web site.)

As for Purdue's, I couldn't find them either. I'd link you to their Round 1 game notes, but PurdueSports.com's frame design won't allow that. The Internet sucks.

A brief preview: As a fan, I obviously tend to underrate my team and overrate everybody else.

Last time around, I mentioned that Stanley Robinson would likely need to score for UConn to be successful. Naturally, he scored a fairly quiet 12, and UConn rolled despite Hasheem Thabeet sitting much of the game in foul trouble.

So now I've come around from that position: A.J. Price needs to keep carrying the load. Everything clearly works better when he's knocking down shots. As a senior, he's aware that this is his last chance to leave his mark. So you know he's determined to drag the rest of UConn's sputtering half-court offense across the finish line, if that's what it takes.

Of course, if determination always translated into results on the basketball courts, every team with a senior leader would win the national championship. They're all that determined.

As for Purdue, well, they are to be reckoned with. You don't win the Big 10 conference without having some talented, tough players. OK, I don't really believe that, but at the very least, Purdue creates some match-up problems that UConn will have to contend with. Robbie Hummel can do all sorts of things to mess with Jeff Adrien, and JaJuan Johnson can pull Thabeet away from the basket (Jay Bilas' secret prescription for beating UConn!).

They don't have a Robinson, nor a Price. Nor do they have anyone as quick as Kemba. Though Purdue likely has someone as bad as shooting as Craig Austrie has been lately. If Sticks and AJ are aggressive and feeling their shot, very few teams in the country can compete with UConn. And that will pretty much determine how far UConn goes.

So with that, and my standard "crazy nonsense can happen in one 40-minute basketball game" caveat, I leave you with the words of that great prophet and mediocre utility infielder, Mariano Duncan (or so I am told by our beloved commenters). Let them inspire you.

We play today. We win today. Das it.

For the record, the karma Gods are forcing me to give the following caveat: If I'm wrong, it's not because I jinxed UConn. It's because Porter found a Chipotle in downtown Glendale. So there.