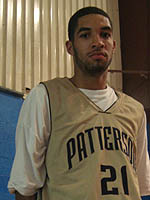 Nate Miles is the subject of a Yahoo report alleging major recruiting violations from UConn.

Breaking news this morning: Yahoo's Dan Wetzel and Adrian Wojnarowski are alleging major recruiting violations against UConn in the recruitment of now-expelled Nate Miles; the accusations include UConn assistants exceeding the amount of allowed communication with Miles; as well as coaches contacting a former UConn student manager, who is said to have provided "lodging, transportation, meals and representation" to Miles while being recruited by UConn.

Josh Nochimson, the former student manager, and a former agent to UConn star Rip Hamilton, is shown on telephone records to have been in "near-constant contact" with UConn assistants. According to Yahoo, more than 1,500 phone and text communications were exchanged between the agent and coaches, most notably UConn director of basketball operations Beau Archibald. Jim Calhoun reportedly contacted Nochimson 16 times.

Miles was expelled on October 2 after he violated a restraining order.

Read the entire thing at Yahoo. This is a complicated story, and there's obviously nothing concrete being said by the NCAA or UConn just yet.

In my opinion - and I don't deal with NCAA recruiting rules everyday, but for what it's worth - there seems to be immutable evidence that UConn staff was in contact with Nochimson, and that Nochimson provided some sort of agent service to Miles.

But what looks particularly egregious is that then-UConn assistant Tom Moore was aware that Nochimson, a certified NBA agent, was in contact with Miles.

I don't know how bad this is. Whenever "major NCAA violations" is thrown around, it's a serious matter. Ask Kelvin Sampson. Obviously, this situation doesn't seem as serious. But recruiting is a dirty, dirty business as it is, and at least some sort of violation seems clear from the report.

On the other hand, it seems as if the violations are explainable (as in, of the "1,500 calls" to Nochimson, two-thirds were from a personal friend of the agent, who happens to be a former teammate-turned-UConn's director of basketball operations. I have no idea whether personal communications between agents and UConn staff are disallowable). And the fact that Miles never even officially practiced with the team should mitigate punishment a bit, you'd think. But this is all speculation.

Regardless of what eventually happens, this story is going to get way out of hand now that the ESPN sensationalist machine has started to churn.

Already, they've reported a falsity: on SportsCenter around 10:35 a.m. Wednesday, they reported that "UConn faces a violation for contacting Miles and his family more than 1,500 times during his junior year."

This is false. According to the Yahoo story, UConn staff contacted Nochimson 1,500 times. That is the height of irresponsible innuendo from ESPN.

(Apparently, during a player's junior year, coaches may only call recruits once per month. Fifteen hundred would have been a much bigger deal, and probably would have meant the immediate termination of Calhoun's tenure at UConn.)

But for now, I'll withdraw more comment on the situation of the case until Jim Calhoun gets a chance to explain himself. That's only fair.

What I will say is that there are lots of extenuating circumstances; probably nothing is quite as cut-and-dry as it seems. Nate Miles was a special situation, and I expect that to be the case Calhoun makes. Whatever he says, it needs to be cogent and responsible. Spotlight's on, Jim.

[Update, 12:40 p.m. -- According to an ESPN report by Andy Katz, Calhoun will defend himself thusly:

"UConn is expected to take the approach that it will defend itself to the NCAA, rather than sound off publicly, despite public opinion that would likely work against it as an investigation unfolds. UConn is also expected to defend the nature of the calls to Nochimson, in particular claiming that at least one of the lengthy calls made by Calhoun -- a 58-minute call in 2007, while Miles was attending Calhoun's summer basketball camp -- was about Hamilton, not Miles."

Sounds reasonable, but reasonableness (on the part of the public and the media) will be long gone from this debate by the time Calhoun gives his presser at 4 p.m. EST.]