Friends with bennies: An inside look at Purdue

Share All sharing options for: Friends with bennies: An inside look at Purdue 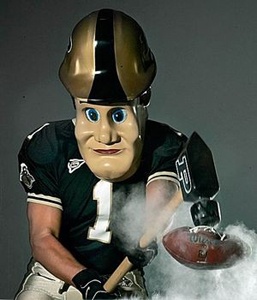 Ever wonder why Purdue hates smoking footballs? We go straight to the source to find out.

After two blowout victories in the first two rounds of the NCAA Tournament, UConn's Sweet 16 matchup with the No. 5 Purdue Boilermakers should be much tougher (and watchable). Although they come from the much-maligned Big Ten, Purdue may have the perfect roster to derail Coach Cal's five-year plan, and some analysts predicted an upset before the tourney even started.

In order to get a more in-depth look at the Boilers, I asked Travis from the Purdue SB Nation blog "Hammer and Rails" to answer a few questions about his team, the upcoming matchup and why Purdue Pete has hippie sideburns, and he was nice enough to provide us with some answers. Travis has already put up a scouting report of the Huskies, and I also returned the favor by answering some of his questions, which you can read on his site tomorrow.

Take it away, Travis:

Purdue was ranked No. 11 in the preseason AP poll. Did it live up to the expectations, and can you tell us a little bit about their season?

I think we performed a little bit under expectations, especially in the Big Ten season. We had three marquee games during our non-conference season. We lost to Oklahoma in overtime when they shot 39 more free throws than we did during the Preseason NIT final in New York. We hosted Duke in the ACC/Big Ten Challenge and the Blue Devils gave us a bit of a wakeup call by handling us pretty easily. I was at that game and it was the most electric atmosphere I have ever seen in Mackey Arena. Duke quickly took the crowd out of it and it was over from there. Our third big game was against Davidson in Indianapolis. That's when things really began to turn because we played such a masterful game against Steph Curry.

In conference play we were limited somewhat by injuries. Illinois beat us in overtime at home in our conference opener, then we lost a tough road game at Penn State without Robbie Hummel and Chris Kramer to start 0-2. Hummel was out for an overtime loss at Ohio State and a blowout loss at Illinois too. Still, we have a chance with four games left to win the Big Ten with everyone back. We went 1-3 in that stretch and played some pretty lousy basketball in losing at Michigan, at home against Northwestern, and at Michigan State. Had we won those three we would have tied the Spartans for the conference championship. Instead, they won the conference by four games. We finished with seven conference losses in a very tough conference, but three were without Robbie Hummel.

I would say we have lived up to expectations at times. When this team is on I am fully confident we can beat anyone in the country. We easily beat Michigan State in Mackey Arena in the most complete game we have played. I know we could have beaten Oklahoma, and probably would have if not for the 45-6 free throw advantage they had. Unfortunately, if our shots aren't falling and we don't rebound games like northwestern, where we blew a 10 point second half lead at home on Senior Night, happen.

The Boilermakers just edged out Washington to make it to Glendale. How do you think they've fared in their first two tourney games?

I think we have fared just as well as Connecticut. You guys have won your games by a combined 82 points, the largest margin among the 16 teams left. We won our by seven points, which is the smallest margin. Still, we have fared just as well as you because we are 2-0, just like you. I don't believe in margins of victory or anything like that. All that matters to me at the end of the game is that we have more points. I don't care if we get there by bombing away and hitting a ton of threes to win 147-145 or if we play lock down defense and win 35-33. In the end that is the important thing.

What are Purdue's strengths?

I think we are a team in every sense of the word. Each piece fits together well with the others. Over the next two seasons we have incoming recruits that are not only great players, but they are the perfect pieces for what we will have returning each year (assuming no one goes pro early). We do not have one dominant scorer that teams can focus on because we spread our offense around so evenly. When 5th year walk-on senior Bobby Riddell plays we have a nine man rotation, and all nine have been in double figures at least once this season.

Our other strength is obviously defense. This was best summarized in the first Michigan State game. In that game we did not let Kalin Lucas breathe. Every time he stepped across the half court line we had a defender there. We didn't even give him space to call out a play. Against Penn state we held the Big Ten's leading scorer, Talor Battle, scoreless. We are an incredibly hard working team defensively. We have always been that way. Two years ago with much less talent we gave Florida their toughest game on their way to their second title. We took that second round game against the defending champs down to the final minutes because of our effort and defense. We may not win on Thursday, but I guarantee we will gain your team's respect with our effort.

Rebounding, Free throw shooting, and general shooting have all been bugaboos at times. Since the Big Ten Tournament started we have been a much better rebounding team, but if that effort slacks off even a little you can dominate the glass against us. We're not a great shooting team, but we can get hot from behind the 3-point line. Robbie Hummel, E'Twaun Moore, and Keaton Grant are our best shooters. Unfortunately our offense can get stagnant at times. It did at the end of each tournament game so far, but the defense bailed us out. Each game from the free throw line is an adventure. We can shoot 90% just as easily as we can shoot 45%.

I've heard a lot of good things about Robbie Hummel, but I looked him up the other day and he kind of looks like my little cousin. What does he do well and why should UConn be worried about him?

Robbie does a little bit of everything. If he is not scoring he is rebounding. He is essentially a worker. He will do whatever asked of him to make sure this team wins. He is a versatile forward that can step out and hit the three just as easily as he can bang inside and rebound. He hasn't been driving to the basket as much because of his back issue, but he is capable of doing that as well. To me, he is the embodiment of a Purdue basketball player in that he will sacrifice personal glory for team goals.

How do you think the Boilers will combat Hasheem Thabeet?

I actually like his matchup with JaJuan Johnson in our favor. From what I have seen Thabeet is not comfortable if you get him away from the basket. JaJuan is a versatile developing center that actually has a very good mid-range jumper. It is not unusual for us to have him at the top of the key, and he has comfortable range from 18 feet in. If we can use JaJuan to draw Thabeet away from the basket it can open things up for Hummel and Moore to drive or do rebound work.

Purdue will win this game if...

We stay out of foul trouble, hit our shots, and continue to put in effort on the glass. We must continue to spread around our offense and not be afraid to push the tempo with speedy freshman point guard Lewis Jackson. Our defense also will have to hassle you guys into turnovers.

Purdue will lose this games if...

We don't rebound. Nemanja Calasan, Robbie Hummel, Marcus Green, and JaJuan Johnson are our top rebounders and they must be ready to go to work on the glass. If we give up second chance opportunities on the glass you will kill us.

Last, and most importantly, what's with the Boilermaker's sideburns?

LOL, I have no idea. Pete has always been that way.