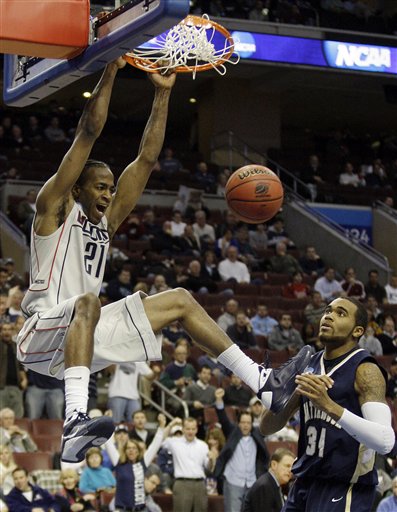 First off, welcome back to Real Coach Cal. Glad you're feeling better. Don't be so angry when guys miss a layup.

OK, I'll be honest: I know absolutely nothing about Texas A&M. I know they're a decent Big 12 team with lots of athletes. I know they crushed BYU pretty good in the first round. And I can see that, in that game, they made 70 percent of their 2s, which can only be a good sign: it's a lot harder to make 70 percent of your shots inside the arc when there's a tree guarding the basket.

The stats reveal A&M to be a middling 3-point shooting team, which is to our advantage. But everything I've read points to a bruising, tough game against a pretty decent opponent.

UConn needs A.J. Price to play like we know he can. And, maybe for the first time, UConn needs Stanley Robinson to score.

Simply put, if Craig Austrie is going to start while shooting at me-like percentages, and Jeff Adrien is going to keep missing layups, UConn NEEDS Robinson to play like a five-star wing just about every time out. That proposition is scary as hell to me, because Sticks is currently at his record for consecutive great games, at two. But we'll see.

Honestly, I could go all in-depth on this game, but it's March Madness. For a No. 1 seed, the second round is the definition of the word "crapshoot." UConn's the favorite today, but as UCLA is learning right now, one hot-shooting day by the other team could mean the end of your season and, in Price/Adrien/Austrie/Thabeet's case, your college career. All I'm going to do is hope. And yell really loudly at my TV.

But before I head out to watch the game elsewhere (sorry, guys - no liveblog from me today, unless Porter or Justin wants/is able to put one up), you should get the vitals. That'll keep you busy for the next 90 minutes or so, if you're not interested in watching the women's first round on ESPN2:

The time: Approx. 3:35 p.m., 30 minutes after Villanova finishes destroying or choking away its big lead against UCLA.

Is this school better at basketball than UConn historically? Nope, although Acie Law IV would have been the best name in UConn history, narrowly beating out Souleymane Wane.

And recently, A&M might actually have been. They're one of three teams to win a postseason game in each of the last five years (along with UNC and Memphis), and in each of the last three tournaments, they've lost heartbreaking decisions in the final seconds. I don't like that karma.

Check out the game notes: Here for Texas A&M, and here for UConn. Most interesting fact: UConn is 26-4 in the first two rounds of the tournament, and 11-8 in the rest of the tournament under Jim Calhoun, both of which are staggeringly good numbers.

Media matters: If you read one thing before gametime, make it David Borges of the New Haven Register's feature piece on Sticks. Made me feel slightly better about our entire season riding on him.

A brief preview: A non-famous Yankee (Luis Sojo?) once said, "We play today. We win today. Das it."