Why I picked UConn to win it all

Share All sharing options for: Why I picked UConn to win it all 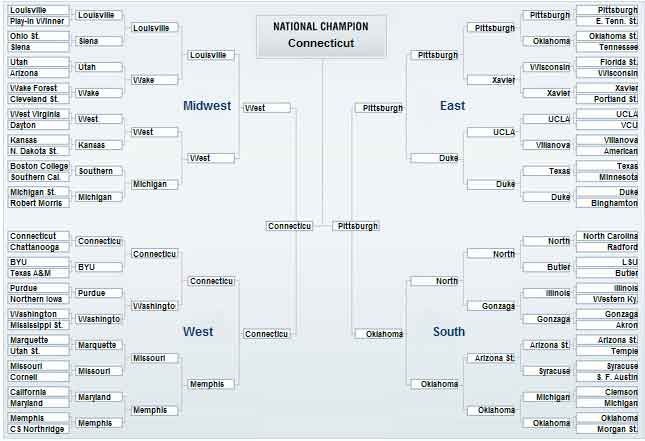 As you can see from my bracket, I picked UConn to win the entire NCAA tournament. To most people, this would appear to mean exactly two things: the first is that I am a complete and total homer and the second is that by the karmic laws of sports, I have now jinxed the team.

I will address the second charge first. Picking a bracket has turned most people I know into bitter cynics convinced that UConn will inevitably choke at some point and the Huskies will get sent home early, furthermore, they believe that by picking UConn they either curse the team or curse their ability to win money in a bracket pool. I will not lie, I am fully aware of the possibility that UConn can lose and I can even admit that that event is likely to happen. However, I have history on my side. I have been filling out brackets for as long as I remember, and one important thing sticks out: UConn has never won a national championship when I have picked against them. Is that stat misleading? Sure, because if memory serves, I probably also picked UConn in '95, '96, '98, '02, '03, and '06. Sure, a 25 percent success rate is not great, but if I gave any UConn fan a straight up 25 percent chance to win it all, I'm sure they would take it. Also, keep in mind that when I do not pick UConn to win it all, A.J. Price's knee explodes.

Now onto the first charge: I am a homer. I will not fight this accusation, it is certainly true, but I ask you, is being a homer such a bad thing? How cynical and jaded have you become when you pull for a team that is not your own. Why do we follow sports if we drop our allegiances at the tip of the hat? This country has turned a corner and entered a new era of hope and who am I to stand in opposition to that hope? If you are a UConn fan, it should be your responsibility to pick the Huskies. Doing anything else is unpatriotic.

Finally, I must admit that my pick of UConn was at least partially fueled by the complete nuttiness of this year's bracket. None of the No. 1s stuck me as good enough to blow through their regions, but then no one else struck me as being good enough to upset them. I have UConn over Pitt in the final because I feel that matchup is fated to happen. UConn and Pitt are destined to meet again so the Huskies can have their revenge. However, fate is a harsh mistress so I fully expect Florida State or Xavier to knock Pitt out in the Sweet 16.

It all comes down to the simple fact that my bracket was certainly going to be busted before I even put a pen to paper, so instead of suffering over it, I decided to go with my heart. So you heard it here first, UConn is going to beat Pittsburgh to win their third NCAA championship, and, as in all other games, I am certain the final score of that matchup will be UConn 77, Pittsburgh 74.