For the love of all that is sacred, can we please win one of these?: #1 UConn v. #16 Chattanooga preview

Share All sharing options for: For the love of all that is sacred, can we please win one of these?: #1 UConn v. #16 Chattanooga preview 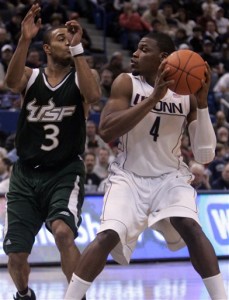 I was invited by our buddies at Orange:44 to participate in a little Q&A following Syracuse's 6-OT win over UConn last week, so check that out if the color orange no longer gives you the rages.

Also, if you haven't been checking out the awesomeness that is Rush The Court, you should be. They are going balls to the wall previewing the NCAA Tournament, and it's really quite impressive. Another reason to check out RTC: A UConn tournament preview penned by yours truly.

Finally, of course, UConn plays tomorrow. So we'll be running TheLiveBlog as per usual. But since Thursday and Friday of the Tournament are my favorite two days of the year, I'll attempt to run TheLiveBlog all day, and hopefully for both days, beginning at noon (take that, class!). I plan on camping out in my room with a TV flipping between the two CBS channels we get on campus, as well as March Madness On Demand on the laptop. I hope to catch every game for at least a little bit, and I encourage y'all to stop by. On the plus side, you'll be saving me from my own lonely version of hell!

Way back when we started this whole shindig, UConn fans weren't exactly sure what to expect.

We all remembered the godawful 2006-07 season, and we watched those exact same players grow into a solid top 20 team.

And this year, that core made The Leap, as Bill Simmons might write.

For a while, everything was gravy. The Huskies cruised through just about every test until they lost Jerome Dyson back on Feb. 11. Then they became the property of the University of Pittsburgh on two occasions. And then they played the most epic game ever. Actually, you don't have to take my word for it, you can read our chronicling, which will I'm sure will be turned into "Hoop Tales III: That One Year Where They Had The Really Tall Guy," co-written by the three of us.

Anyway, we're finally at Thursday, March 19, the first day of the NCAA Tournament. And now, UConn will go for its first postseason win since I was living in the Jungle.

So, like, this should be a shoo-in, right? All that stands in the Huskies' way to finally starting that postseason roll is Chattanooga, who was covered in depth yesterday by Justin.

But let's not take anything for granted. UConn fans should always be wary of 16 seeds in Philadelphia. And really, as a senior, how can I treat as mundane any game that could be my last as an undergraduate?

Last meeting: UConn, led by Ray Allen, among others, blew out Chattanooga in the first round of the 1995 NCAA Tournament, 100-71.

Is this school better at basketball than UConn, historically? Ha! I don't think I'd say yes even if it were true. You expect me to cut the Fightin' Shoes some slack?

A brief preview: Well, it's a 1-16 game. There are no real stats I can point out that can say it better than that.

UConn should dominate, Hasheem Thabeet should introduce his long arms to an entirely new audience of players.

No one outside of the Big East even gave the Huskies a bit of trouble this year, and that should continue Thursday. No one should lack in confidence.

And yet ... this is probably the most meaningful 1-16 game in UConn history (yeah, yeah ... out of the five). I'm not saying that I believe that the Huskies can get enough momentum in this game to advance deep into this tournament. (Hell, it would not shock me at all to see BYU or Texas A&M win on Saturday).

But at some point, this nucleus has to take care of business, right? In the last seven days, four Big Ten teams won two postseason games. FOUR! And UConn - if you hadn't heard - hasn't won a postseason game since 2006.

I hope the players are as fed up about hearing that stat as I am. Enough is e-damn-nough.

It's time to end the timidness, the shaky starts, the off-nights by 3/5ths of the starting lineup and the poor perimeter defense - the things that have frustrated the hell out of everybody for some time now.

Media matters: The Courant's preview is all about Chattanooga wanting to make history and become the first No. 16 seed to win a game in 97 tries.

If that happens, I will give up on sports for one month. All sports, no exceptions. I swear to you. I will post nothing but descriptive poetry and detective-thriller short stories on the blog.

The New Big East Report's preview brings up the Albany game, as well as the G*orge M*son game from 2006. They also say (essentially) that Chattanooga hasn't played anyone on UConn's level. Take that, Fake Coach Cal!

For the more statistically inclined, here's Basketball Prospectus' West Region preview, as guru Ken Pomeroy uses fancy numbers to tell us that Memphis has the best chance to win the region. Stupid numbers.

Frankly, there is just way too much to link to, and my mind is on overload right now. So, in the final hours before the tournament, make sure to visit any of the fine Big East contributors on our blogroll. For the national picture, check out the crazy-informative Rush The Court, as well as Storming the Floor, College Hoops Journal and Ballin' is a Habit (the latter two run by a Connecticut resident and a UConn fan, respectively.) All of those blogs are bringing the goodness as part of the best week ever. And like the Christmas season, we're all about giving linkage.

My pick: Like this is any secret. As a way to entertain you, I give you the one thing I know about Chattanooga: