Share All sharing options for: Calhoun will miss UConn's first round matchup 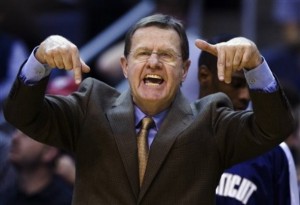 Various and sundry media outlets are reporting that UConn head coach Jim Calhoun will miss today's first round matchup against Chattanooga. Associate Head Coach George Blaney will coach the team in Calhoun's stead. You can find the Hartford Courant story here, though it is low on specifics (though, it does have this great first sentence: UConn coach Jim Calhoun will miss Thursday's NCAA tournament first-round game Tennessee-Chattanooga."). However, more important than any on-court implications is the historic comparisons we can draw from this incident. Notably the fact that in 1999, UConn was also the 1 seed in the West region, and do you know what happened that year? Why Jim Calhoun missed the first round NCAA game because he was ill. That 1999 team went on to win the NCAA tournament, so I think you can see what I am getting at here. Call it all off and just mail the trophy to Storrs. Thanks NCAA, it was fun.