Women's team given No. 1 overall seed, scoffs at teams with "losses"

Share All sharing options for: Women's team given No. 1 overall seed, scoffs at teams with "losses" 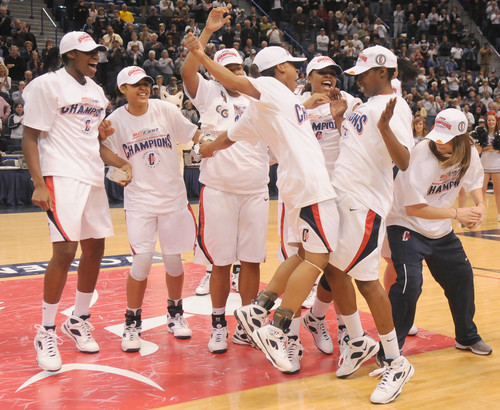 I always wondered how women's players got around that whole chest bump thing.

Just in case you were confused, the women's team hasn't officially been given the national title yet. But that's mainly because the NCAA insists on formalities.

The Huskies were given the No. 1 overall seed in the NCAA Tournament Monday and will take on Vermont Sunday at noon. And just in case the Catamounts had even the slimmest of hopes of pulling off the upset, the game will be held at Gampel Pavilion. So Maya Moore could conceivably sleep in, have some of those moderately edible wings they serve every weekend at Putnam and then still drop a cool 30 in another 20-point blowout.

But, isn't that the beauty of women's basketball? Using backups as placeholders with a big lead so the regular starters can sit and laugh at their mortal abilities?

Disclosure: Someone just alerted me to this Deadspin post, which has a similar headline to the one I had before. I didn't copy it, but it was up well before mine, so I changed it. I just didn't wanna seem like a cheater. You know, the whole ethics thing.