The agonies and ecstasies of UConn's tournament history

Share All sharing options for: The agonies and ecstasies of UConn's tournament history 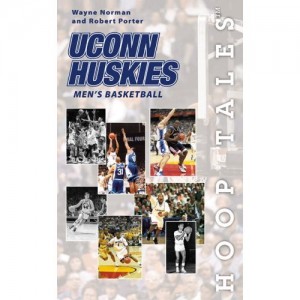 This is a guest post from lifelong UConn fan Robert Porter. Porter is the co-author of Hoop Tales: UConn Huskies Men's Basketball and more importantly, the co-creator of UConnBlog.com editor Andrew Porter.

Yes, Virginia there was UConn basketball before the 2006 OT loss to George Mason that cost the Huskies what was thought to be a "slam dunk" Final 4. Indeed, going back over more than 40 years, UConn hoop fans have had about as many memorable joys and tears as the Red Sox faithful.

So before we lament recent post-season agonies, such as six-overtime losses, check out the jump for a look at UConn's triumphs and failings since the mid-1960s.

1964 - Ecstasy - In 2nd round of NCAA the Huskies are a huge underdog to then power Princeton with all-time hoop icon Bill Bradley. Long before he coached UConn, Dom Perno was a good all-around player, and he stole the ball from Bradley with seconds to go to give UConn a rather shocking two point upset. (Ed: You know that upset had to be good, because it overshadowed what happened in the next game, Duke pasting the Huskies 101-54)

1966 - Agony - UConn forces a playoff game with Rhode Island with winner set to go to NCAA tournament. The Huskies led by 7 with 8 or so minutes to play when Channel 8 announced plans to televise UConn's opening round NCAA game. From that moment on, the Huskies went in tank, ultimately losing by 5 - even worse was players hearing UConn top brass had turned down an NIT bid.

1974 - Agony - UConn goes to NIT (when it still meant something) under Coach Dee Rowe and pulls off huge 1st round upset as a 12 point underdog in Madison Square Garden over then national power St. John's. In 2nd round, UConn has 17 point second-half lead over Boston College, and seem destined to reach the NIT semis. The lead melted away and UConn lost in the final seconds. Rowe who at age 80 still works at UConn and is a beloved member of the Huskies of Honor, has called it the worst loss in his coaching career.

1976 - Ecstasy - Pre-Big East there is a four team New England tournament to determine a NCAA bid. Fourth-seeded UConn knocks off top seed UMass in thriller and then destroys heavily favored national power Providence to go to NCAA. The Huskies came from 18 points down to win their NCAA opener in overtime over Hofstra. It almost makes Rowe forget the BC loss of two years before - but not quite.

1988 - Ecstasy - a 14 and 13 UConn team that finished 8th in the 9 team Big East manages to get an NIT bid and stun Husky nation by winning it all under then 2nd year coach Jim Calhoun, who has called it the turning point in his 23 years at UConn.

1990 - Both - What is still known as UConn's "Dream Season" brings a stunning Big East championship (the Huskies tied for the regular season championship and won the Big East Tournament before being named a 1 seed in the NCAAs). In sweet 16, UConn wins an awful game (blown lead of 19 points) on Tate George's miracle shot at the buzzer and then loses the same way to a Duke buzzer beater two days later, preventing UConn from reaching the Final Four. The oddity: the loss was a classic, superb game to watch, and, again, aside from last one second, the win was just a horrid game.

1994- Agony - UConn earns a 2 seed, but thanks to Boston College upsetting top seed North Carolina, the Huskies became huge favorites to make their first ever Final Four. In the Sweet 16, UConn was up 10 over Florida in 2nd half before blowing the lead. All-American Donyell Marshall, who had made 20 of 20 foul shots in Madison Square Garden earlier in year, missed both foul shots in tied game with 3 seconds to go. Of course, UConn loses in OT. In my point of view, the worst ever loss in UConn's history.

1996 - Agony - The Huskies were a 1 seed in Ray Allen's final year and were again heavy favorites to reach their first Final 4. In the regionals they ran into a "one night hot" Mississippi State team and lost 60 - 55. Syracuse, who UConn easily handled in regular season, made it to Final Four, easily beating Miss. State there, only to lose in championship game. The New York Post labeled UConn as "U'Cant"

1999 - Ecstasy - Think of Red Sox 2004 here. Every demon is exorcised when UConn wins true nail-biter as a No. 1 seed over No. 10 seed Gonzaga to finally GET to the Final Four. Being there relax all Huskies - players, coach, and "Husky Nation" in state. A rather easy win over Ohio State in the semis led to UConn's greatest ever game - a 77 to 74 win over 9 point favorite Duke to win NCAA crown.

2004 - Ecstasy - just a lower level - UConn loses 6 regular season games in large part because of Emeka Okafor's back problems, but the Huskies won a thrilling Big East Tournament final over Pitt on his return. It become a cake-walk to final four and only scare was Okafor's foul trouble in the first Final Four game against Duke, but a great last three minutes led to comeback win. That was followed by another cake-walk over Georgia Tech for the 2nd national championship. The 2004 champs to 1999 are like the 2007 Red Sox to 2004. Nice but nowhere near the same thrill.

Let's skip past 2006 to the present, and three final thoughts. First is something to keep mind should UConn meet Memphis. In 50 years of closely following college hoops there are TWO Final Four teams whose presence was later "vacated" by the NCAA due to large scale scandal in violation of rules. One was 1971 Villanova, the second was a team (UMass in 1996) coached by John Calapari. I have more trust in Bernie Madoff than in this rogue coach.

Second if any UConn fan is unhappy as to seeding, please go back 11 years to a great team in 1998, the year prior to first national championship. That team won 31 games but was seeded 2nd to North Carolina with the region played in North Carolina. I think the tournament selection committee has been trying to make up for it to UConn ever since (Ed: Except for 2003 when UConn lost to Texas by 4 in San Antonio)

Third, there is pressure and then there is "pressure"! The latter will not be on UConn with two titles in last decade. Instead, it is on PITT who has NEVER been to Final Four (ok, research showed they were there in 1941). Bobby Knight picked Pitt to win it all last year. They will play, if they know anything about their history, with much tighter collar than a team like UConn.

So, let's enjoy the upcoming tournament and remember the former Georgetown coach and hoops icon John Thompson who said (pre play-in game) that "They invite 64 teams so 63 can go home in tears." For well over 40 years, "UConn Nation" among old-timers has had its share of both tears and cheers.