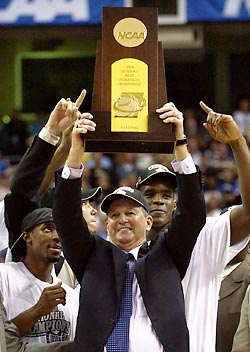 I must say, I was not expecting a one seed. Not after the way Memphis closed out the season, and not after seeing all the pre-Sunday brackets with the Tigers jumping UConn in the top line.

But there it is. Justice prevailed and UConn was chosen as the West's No. 1, where it will take on all 18-16 of Southern Conference champ Chattanooga, land of many vowels, in the first round Thursday at 3 p.m.

Getting the fourth one seed didn't matter too much, because we still got stuck with Memphis in the bottom half of the bracket, but I'm sure we can all agree it felt pretty good to see that adorable husky dog pop up on the screen at the top of the show.

UConn will get to play just a four-hour drive for its first two games in Philly, but it did get kicked out of the Boston regional and placed out West. Which is probably a bit disappointing to those willing to travel to see the games, but for me and my limited budget, we couldn't be happier.

As most of you know, UConn has won each of its two national titles coming out of the West bracket. And wouldn't you know it, the 20-oh-fow team played their regional final in Phoenix and this year's team will have to go through Glendale. That's a whole lot of coincidence going on just in time for Coach Cal to cash in on another five-year plan.

Although the bad news is UConn started off in Philly three years ago before a certain team knocked us off in the Elite Eight. But we're just going to ignore that for now.

As far as the draw, I'd say it's a pretty favorable one. Aside from maybe Purdue, a team most of the ESPN set was gushing over, it's hard to see UConn being tripped up on its way to the Elite Eight. And even if the Boilermakers make some noise, it's hard to believe the best team in a conference that still shoots granny-style free throws will derail the five-year plan.

The bottom half of the bracket, however, is a different story. Although Memphis played only seven games this season, every player on its roster is a 6-7 wing bought at a reasonable price and their motion offense could render Theebz useless. Let's just hope Mizzou or someone else can knock them off.

We'll delve into the bracket later in the week, but for now, here are a few quick thoughts I had while watching the selection show:

"The Final Four is scheduled for Ford Field in Detroit on April 4 and 6. Last year, all four No. 1 teams made it to the Final Four. But Pitt (East), Carolina (South) and UConn (West) all know its called March Madness for a reason -- things rarely go to form.

So, time to break out the brackets, sharpen some pencils and pay into an office pool (or two).

Maybe do a little griping here and there."

We'll probably have all types of tourney previews before UConn's matchup Thursday -- which is about the time it will take to figure out what the hell a "Moc" is -- so make sure to check us out all this week for posts with more substance than this one.