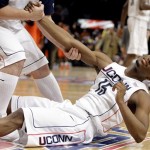 The numbness set in just now. It is 2:28 a.m. in the MSG press area as I write this, and I can barely feel my face.

Syracuse 127, UConn 117. Six overtimes. A game that will be forever remembered by college basketball fans as one of the best games ever played.

I'd like to think that if there is some sort of sports God, or sports karma, that he does this type of thing to test us.

It'd be easy as hell to turn your back on UConn for playing so awfully for most of the second half, nearly giving up a miracle buzzer-beating 3 in regulation, blowing two-possession leads in the final minute of more than one overtime, and wasting more chances to win a basketball game than I thought possible.

That would be easy. If you don't believe me, check out the hysterics in between the posts filled with awe on the Boneyard.

But no, I tend to believe that this is just a test. A team like UConn, who showed utter heart and determination for 65 minutes before finally running out of gas, deserves better.

Call me naive. Maybe I've seen too many movies. I tend to think that the good guys will generally win. And like a religious zealot, I'll always consider my side the good guys. If there's any justice in this world, fortune will eventually favor the good. Which is a metaphorical way of saying that the good don't win quarterfinal games in a conference tournament.

Practically speaking, UConn probably doesn't have enough to win six straight games in the NCAA Tournament. And that's not really news. Only one of these really good teams will win the whole thing.

So tonight was kind of a forced realization for me. UConn just has no offensive options outside of A.J. Price, and they may well fall victim to some team's 2-3 zone or hot shooting night in the coming weeks. Tonight was the first step toward accepting that, for the more zealous among us.

It sucks that it had to be Syracuse to do this to UConn. For the fourth time in five years.

And it sucks that A.J. Price and Jeff Adrien graduate without winning a meaningful game at MSG.

And it sucks that a 23-1 start was derailed by an injury, and UConn's bench was destroyed by factors outside of Jim Calhoun's control.

And it sucks that my school is on the losing end of the greatest game ever played.

But more than anything, it sucks that I have to confront my own team's mortality. (As an aside, I will be a miserable person if/when I reach 50 years old.)

I've noticed that, this year anyway, I take UConn sports way more personally than I probably should. I'm hoping it stops when I graduate. Either way, it explains why I don't want this season to end. This is my team. And I don't want these great and wonderful players, Thabeet, Price and Adrien, to leave my team.

For a while, I could avoid those thoughts. It was easy. There was plenty of season left and, besides, this was a different team from the last three years. They'd surely make a deep run through March.

The only thing keeping me going as a UConn fan tonight is my blind faith that, indeed, fortune favors the good.

Right now, at this moment, it is 3:06 a.m. I'm still sitting in a press room with about 30 people still clacking away at their keyboards. The tables would be considered "bare" at just about any other time than 3:06 a.m.

The sun will rise fairly soon, perhaps by the time I get to sleep. Last night was just a game, of course. Not even a championship game. Just a phenomenal, will-live-forever game between two rivals.

It pains me to say it, but: good game, Cuse. Still hate you, and your obnoxious tattooed punk. (Jump on the table again, you ass.)

I love sports, more than just about anything in the world. And tonight was just about the damndest thing I've ever witnessed, even though my team lost. I wouldn't have traded places with anyone in the world tonight.

(Also, special thanks for those of you who joined in the liveblog. It was a blast.)