Words will not do this justice

Share All sharing options for: Words will not do this justice 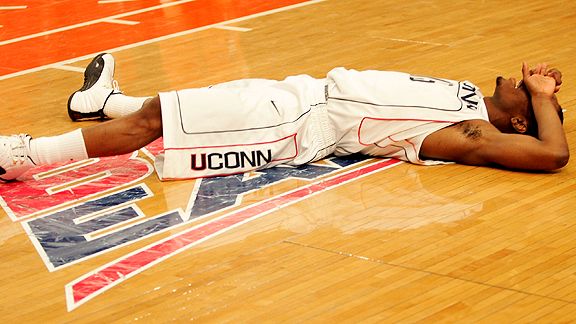 I have spent the last 18 hours thinking of what I would say about the game, and I realize now, that nothing I can come up with will accurately express how I feel. Besides, if you want true insight, go read what Meacham wrote. His liveblog and wrap-up say everything that needs to be said. Plus, I am both physically and emotionally exhausted. So with those disclaimers in place, here are just a few of my many thoughts:

Looking forward, I, like Meacham, have come to see the team's flaws much more clearly. The bench is too shallow, they are missing a key scorer in crunch time, and the perimeter defense is simply not the same. That being said, I am not giving up on the team.

At this point, I think the general consensus is that UConn will either back into the fourth No. 1 seed or fall and become the top No. 2 seed. Either way, I am not sure it matters (in fact, I am much more interested in seeing if UConn winds up in Boston or gets shipped out to a place like Glendale.) If I had to bet, I would say UConn is likely going to wind up with either Michigan St. (please God!) or Memphis (no God no!) in their bracket. Either way, two things are clear: UConn has some serious flaws, but they also have the potential to be incredibly dangerous. Obviously, I will wait to see the final bracket before making a prediction, but I would not be surprised if UConn gets bounced in the Sweet 16 nor will I be shocked if they make it to the Final 4. The talent is there, but now, more than ever, UConn has to hope favorable matchups will be too.