Share All sharing options for: Oh, not this again: #3 UConn v. #18 Syracuse 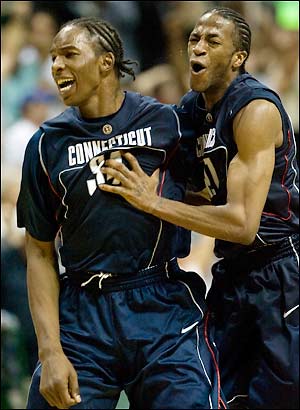 (We'll try to get another TheLiveBlog going sometime tonight around 8:30, though I don't know how much free time Justin or I will have. And Porter will be somewhere in the UConn student section, drunkenly cursing out Kristof Ongenaet. If there's no CoverItLive thread, feel free to use this post for all of your live commenting.)

From a UConn perspective, the bottom half of the Big East tournament draw might as well be called Calhoun's Revenge Tour. Lying in the Huskies' path to Saturday's championship game are the Syracuse Orange tonight.

As you might remember, recent Big East tournament history against the Orange has not been kind to the Huskies.

And should they manage to beat the Orange, tomorrow might feature a third heavyweight title fight between UConn and Pitt.

Also of note tonight: UConn has not won a postseason game since a 98-92 OT win over Washington in the 2006 Sweet 16. That was the game where Rashad Anderson hit a miracle 3 to tie at the end of regulation, the Huskies got a bunch of shady calls, as well one of the greatest least-remembered plays in UConn history (Marcus Williams' steal late in OT after Washington cut UConn's lead to two and forced a turnover on the ensuing inbounds pass).

So yeah, there's some incentive to win tonight, or at least not to come out flat.

I think you get the point.

Also an incentive for victory tonight: Syracuse. As you may know, around these parts, we don't much care for fellas in Orange. And so tonight they, and their poser, tattoo-covered thug shooting guard, must get their whoopin'.

Quick preview of tonight's game is below the jump.

The place: Madison Square Garden, the greatest arena in the world

The Vegas favorite: UConn, minus-5

Last time out: UConn exerted their will and grinded out a 63-49 win at Gampel Pavilion back on Feb. 11, allowing me to end the best half-week ever with a smile. Thirty-six of the 40 minutes in that game were played without Jerome Dyson, so it's not like that should be any more of a factor.

Of course, Syracuse has beaten UConn three times in a row in Big East tournament play.

Check out the game notes: here for UConn and here for Syracuse.

The preview: I'm a little crunched for time, as my train to NYC leaves in about 20 minutes, so I'll make this quick.

Just a couple of storylines to keep an eye out for in this game:

1) Kemba Walker's return from strep throat which kept him out of practice since Sunday's game.

UConn is already thinner than Jonny Flynn's case for not being the goofiest man alive. Missing their now second-best guard, or having him at 60% strength, would be a terrible blow.

2) SCOTTIE~! needs to get more playing time. As we've said for a long time, Craig Austrie is hurting UConn with his poor play. At least Haralson can make open shots.

3) Hasheem Thabeet threw some 'bows last time these two teams played. Considering that Devendorf is Capt. Street and he must protect his boys, yo, look for things to spiral out of control if it gets even the least bit physical.

4) This is UConn's chance to prove that it has a different makeup from the previous two years, when the Huskies were 0-fer in the postseason. A good start is a must, and the Huskies have got to get some guard play from someone besides A.J. Price.

5) For the love of God, Jeff Adrien, please make your layups. Please.

And we'll finished this abbreviated preview with my pick:

UConn can't lose this one. Just can't. A loss would drop UConn out of a top seed or perhaps send them to the West. You might say, "hey, they went to the final four both times they went out West." To which I say, yes, they played Gonzaga and Alabama those years.