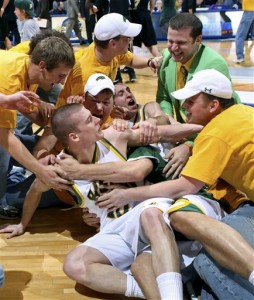 The most exciting thing to ever happen in North Dakota.

Last night, seven teams clinched automatic bids to the dance. They, and their chances at playing mighty UConn, are below the jump:

Now, Porter admonished me today that UConn is a lock to be a No. 1 seed. The rational part of me wants to make this argument:

For purposes of this exercise, there are plenty of ways for UConn to drop to a No. 2 - a loss in the quarters, another loss to Pitt plus conference titles for two of Louisville, Oklahoma and Michigan State, another injury, or Coach Cal throwing spoiled milk at NCAA Tournament selection committe chair Mike Slive. A lot could still happen.

On the other hand, Porter is a huge homer who thinks Stanley Robinson is the best player in America. I like the first argument.

Anyway, none of the three teams who qualified last night are 16-seed material - they should all slot in somewhere around 12 or 13 - so the top five or six teams stay roughly the same.

So here are the Day 2 men's Opponent Watch rankings, comprising the automatic qualifiers through Tuesday. Remember, this is in order of likelihood of being a No. 16 seed (so theoretically, the top two teams would be headed for Dayton):

Four teams added their name to the NCAA guest list Tuesday. Two of them are candidates for the dreaded 1-16 matchup in the Trenton regional, although if you read the blog last night, you see where I'm going with that.