St. John's does something they have not done since Emeka Okafor's sophomore season

Share All sharing options for: St. John's does something they have not done since Emeka Okafor's sophomore season 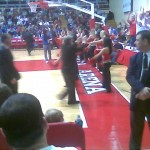 ...i.e., win a Big East tournament game. The Red Storm, seeded 13th, upset 12th-seed Georgetown, 64-59, in the second game of the first round of the BET at MSG 2day. As you'll recall, Mike Jarvis' Traveling Scandal Wagon left the Johnnies in a bit of a mire.

I believe (correct me if I'm wrong) they were banned from playing in the conference tournament for two years, and they missed the tournament due to more conventional reasons (sucking) two of the last three years.

So let me be the only UConn fan anywhere to offer congrats to the Johnnies.

They'll play 5th-seeded Marquette in the second round. The winner will then be just 13 rounds short of a spot in the Big East championship. (That 9th-round game is always a tricky one.)

As for the Hoyas, their inexplicable defeat of UConn back on Dec. 29 is now completely meaningless, as G-town finishes 16-14 and will be lucky to get picked up by the CBI or that fourth-rate tournament that no one knows is actually happening. After being ranked No. 8 in the country and starting off 11-1, I have no idea what happened.

On the plus side, at least the folks over at Hoya Suxa have absolutely no material to work with. Nope. None.