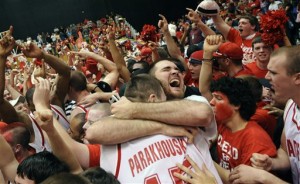 Radford fans and players celebrate the opportunity to be steamrolled by Hasheem Thabeet.

Like Payette County, Idaho, UConn is composed of roughly 20,846 people. Just about all of them know that the University of Connecticut can beat most teams in men's or women's basketball, and surely we could beat any five people crappy little Payette County could put together.

However, now that we've entered the best time of the year, it's time to start concerning ourselves with other teams. Worse teams. Teams who, for no reason other than America's whimsical, romantic fascination with the underdog, will bring their school into national prominence merely by showing up on a basketball court in front of CBS television cameras next week.

To put it bluntly: UConn fans should start concerning themselves with who's a-double-crooked-letter they gon' whip next Thursday, Friday or Sunday in the first round of the men's and women's NCAA Tournaments.

And that's why I'm here to inaugurate Opponent Watch.

Now, we all know that the UConn men are a mortal lock to be a No. 1 or No. 2 seed. And the UConn women should rightly get a bye to the national title game, but instead they will be forced to play five exhibitions as a way of maintaining the facade of fair competition.

Now that nine men's teams have won their conference tournaments, we can begin to possibly project the possible opponents.

The first projections (which I'll try to have every day between now and Sunday) are below the jump:

(These are just the teams who have won their tournaments through Monday, listed in order of likelihood to be a No. 16 seed. The rankings are compiled based on my own intution, with a little help from the insanely helpful CollegeRPI.com)

Morehead played a fantastic game to upend Austin "Let's Go" Peay in the OVC final Saturday. Their reward seems likely to be a date with the SWAC champion in Dayton next Tuesday.

Chattanooga avoids the dreaded top spot by virtue of a couple of wins over Stephen Curry U.

If you don't want to play UConn in the first round, you best avoid this 4-5 spot in our little informal ranking. Unfortunately for the Big South and the Highlanders (I thought there could only be one), the SWAC and MEAC have yet to begin their tournaments.

I know nothing about them, other than Timmy Smith was awesome back in the day. One of my favorite inexplicably high-scoring small-school players of this decade, along with Jason Conley of VMI.

Cornell has the weapons to be a sleeper pick as a 14 seed, and rightly so. As all Cornell graduates know, the best weapon is a Prius, because it is silent when it travels below 5 miles per hour.

Congratulations, MVC, on being the asymptote to the Big Ten's curve of boring, every-game-a-defensive-struggle basketball. (Yeah, a math joke. I passed Calc 1.)

In 2006 VCU beat Duke in the first round. Monday night they crushed G*org* M*s*n in the CAA final. As long as Eric Maynor stays the hell away from UConn's region, I'm a big VCU fan.

Judging by this story, Siena fans are rabid and on the lower half of the attractive scale. I know someone who resembles that remark...

OK, honestly, I just kind of wanted to chuckle at the thought of UConn playing Gonzaga in the first round of the tournament. Wait, no, not chuckle. Recoil in horror. Yeah, that's it. Anyway, they'll be off the list tomorrow, replaced by at least one of the Sun Belt, Summit and Horizon champs.

Now, on the ladies' side, things get a little easier. We only have four teams to worry about, and this should sort out pretty simply as the week goes on.

The best part of the women's tournament has to be that the lucky loser on this list will be getting an all-expense paid vacation to Storrs for the first round, thanks to Connecticut's love affair with women's basketball.

Thankfully, if AP wins the jackpot, this means I'll get to hear the glorious "Let's Go Peay" chant in person.

The women's C-USA is not quite the powerhouse on the men's side; there are zero top-75 teams instead of one. UCF will be looking at probably at 14 or 15 seed, because C-USA isn't awful, but that record just screams "send us to a top seed."

Hey, ETSU makes appearances on both lists, making them like UConn basketball, only the complete opposite. In any event, I call shenanigans. Florida Gulf Coast, at 26-4 clearly the A-Sun's best team, was not eligible for the conference or NCAA tourneys because of its transition from Division II. In fact, I'm so outraged that I may protest NCAA HQ in Indianapolis.

Who's with me? Who else will stand up for Florida Gulf Coast women's basketball?

Should've been you, Chattanooga, who came this close to knocking off Tennessee. Insted, the Catamounts will represent the conference by getting their doors blown off.

Join us tomorrow as we continue this exercise in time-wastery.