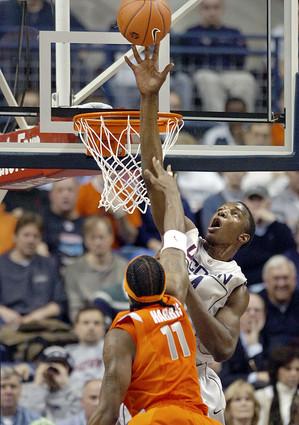 This just in: Hasheem Thabeet is good at defense.

So good that he was just named conference defensive POY for the second straight season. Although I made light of Theebz's offensive shortcomings yesterday, there's really need to joke here. Thabeet is the best defensive player in the game, and probably one of the best ever in the Big East. Besides, we're a bit worried he may swat us and then run away laughing at our effrontery.

Thabeet's '09 selection makes him the second UConn player to win the award twice, and also marks the sixth time in seven seasons that the Huskies have boasted the conference's top defensive player. He's also the fifth Huskies player to earn the honor, joining Emeka Okafor (2002-03 and 2003-04), Hilton Armstrong (2005-06), Josh Boone (2004-05) and Donyell Marshall (1993-94). That's what we call dominance, folks.

Also noteworthy is that Thabeet is now only five blocks shy of the Big East's career record (288) held by Patrick Ewing, meaning he only needs one block more than his season average of 4.5 in UConn's next game. Wow. Can we take a second to appreciate that? That's some accomplishment, especially since Ewing played four seasons.

All the big ones are slated to be given out by tomorrow.